You are here: Home / Sports / Emotional Lehman says being part of winning Ryder Cup team in Minnesota is tops (AUDIO) 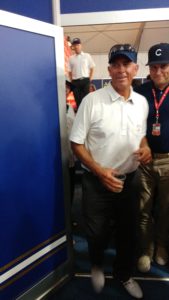 Lehman leaving the media center at the 2016 Ryder Cup

Minnesota golf legend Tom Lehman was born in Austin and raised in Alexandria.  During a stellar playing career in which he’s won the British Open, he says serving as a vice captain on this winning US Ryder Cup team in his homestate “is at the very top” in terms of satisfying golf achievements.  Lehman says when the American clinched he and his family started to cry tears of joy.  He says he is proud of how well the team played and how well Minnesota showcased itself as a state that loves the sport of golf.

For the first time in eight years, the United States defeated Europe to win the Ryder Cup 17-11 at Hazeltine National Golf Club in Minnesota.  Ryan Moore took home a 1-up victory over Lee Westwood, and the celebration was on.  Ryder Cup star Patrick Reed also won his singles match against Rory McIlroy 1-up.  Rickie Fowler, Brent Snedeker, Brooks Koepka, Zach Johnson, and Dustin Johnson pitched in winning their singles matches for the U.S. on their way to the victory.  This was the United States’ first Ryder Cup victory since 2008 and only their third over the past two decades.

Lehman was emotional when describing what the week at Hazeltine National Golf Club during the 41st Ryder Cup has meant to him: