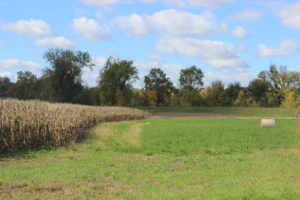 Soil temperature is measured at a six‑inch depth; the same depth anhydrous ammonia is typically applied. Station data on the MDA on-line map is updated every 15 minutes with the help of satellite uplink technology from the Minnesota Department of Natural Resources and the National Weather Service.

In addition to delaying application until soil temperature stays below 50˚ F, best management practices for nitrogen use developed by the University of Minnesota Extension recommend using a nitrification inhibitor when fall applying anhydrous ammonia in south-central Minnesota. Fall applied urea is not recommended for south-central Minnesota. In southeast Minnesota’s karst region and statewide on coarse-textured soils, fall application of nitrogen fertilizer is not recommended regardless of soil temperature.

The MDA has announced plans to develop a rule by 2018 which will restrict fall nitrogen fertilizer application in areas vulnerable to groundwater contamination. This would include southeast Minnesota’s karst region and statewide on coarse-textured soils. The rulemaking is part of the state’s revised Nitrogen Fertilizer Management Plan which was completed in 2015.

An up-to-date soil temperature map can be found on the MDA’s website: