You are here: Home / News / Father charged with murder in 4-month-old daughter’s death 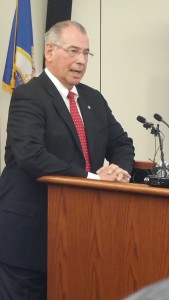 A Minneapolis father is charged with murder in the death of his infant daughter.

21-year-old Cory Morris is accused of punching his daughter, four-month-old Emersyn, repeatedly in the head and chest because she wouldn’t be quiet on Saturday. The baby was taken to Hennepin County Medical Center where emergency medical personnel attempted unsuccessfully to treat her critical injuries. She had severe bruising and swelling to her face and chest area, and was pronounced dead from blunt force trauma.

According to the criminal complaint, police, fire and ambulance personnel responded to an emergency call on Sunday afternoon on the report that a father had called 911 and admitted killing his baby. When police arrived on the scene, they saw paramedics and firefighters performing CPR on a four-month-old infant girl. She was unconscious and the officers saw blood on the wall and floor near the changing table in the baby’s room.

Hennepin County Attorney Mike Freeman says: “This poor baby, just four-months-old, died at the hands of her father, who has admitted to punching her 15 times with a closed fist and hitting her seven times in the chest.  As a father and grandfather, such brutal actions are difficult for me to comprehend. Family members have suggested there may be mental health issues here.  These will need to be evaluated during the course of this case.”

Morris is in custody and will make his first appearance tomorrow afternoon.