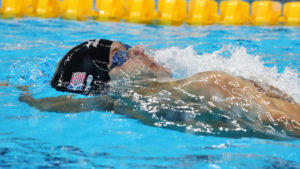 David Plummer will return to Minnesota as an Olympic medalist. The 2008 Gophers graduate took bronze in the 100-meter backstroke Monday night in Rio. He is the University Minnesota swimming and diving program’s first male American medalist since 1972.

Plummer, a first-time Olympian at age 30, took the second seed into the final. He raced in lane 5, next to fellow American and gold medalist Ryan Murphy. Plummer posted a time of 52.40 seconds to come in third. Murphy set an Olympic record in 51.97, and China’s Xu Jiayu took silver in 52.31.

The medal-winning performance was historic for more than just Golden Gopher swimming. Plummer was the United States’ oldest Olympic swimming rookie since 1904. This year marked his fourth time competing in Olympic Trials, and first time qualifying for the Games.

Before Plummer, Minnesota’s last male American medalist was diver Craig Lincoln, who won bronze in 1972. He is technically the first male American Gopher to receive an Olympic medal, as Virgil Luken and Walt Richardson did not receive gold medals for their prelims swim in the 1964 medley relay.

Plummer has been training in Minneapolis at the U of M Aquatic Center under the guidance of Gopher coach Kelly Kremer.  Plummer is also a swimming coach at Wayzata.