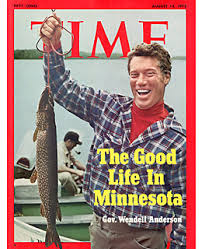 Flags are flying at half-staff throughout Minnesota in honor of former Governor Wendell Anderson–who passed away over the weekend. Wendell Anderson died in St. Paul Sunday surrounded by his family and friends. Anderson, a DFLer, served as governor from 1971 to 1976 and will forever be remembered for appearing on the cover of Time magazine in 1973 proudly smiling and holding a fish he’d caught and the headline The Good Life in Minnesota. Anderson also served in the Minnesota House and Senate and the U-S Senate. In 1971 he helped pass landmark education funding dubbed the Minnesota Miracle. Anderson is survived by his three children and five grandchildren. He was 83 years old.

Wendell Anderson, former Minnesota Governor, United States Senator, and State Legislator, died today at the age of 83, surrounded by his family and friends

Governor Dayton orders flags be lowered to half-staff in honor of the life, distinguished service, and many contributions of Governor Wendell Anderson

ST. PAUL, MN – At the request of his family and friends, the Office of Minnesota’s Governor and Lieutenant Governor announces the passing of Wendell Anderson, former Minnesota Governor, United States Senator, and State Legislator. Governor Anderson was surrounded by his family and friends when he passed, at Our Lady of Peace hospice care in Saint Paul, Minnesota. He was 83 years old. Memorial service arrangements for Governor Anderson will be announced in the coming days.

The following is a statement from the family of Governor Anderson:

“Wendell Anderson was many things: A kid from East St. Paul. A Gopher. An Olympian. An elected public servant of the highest order. But above all else he was a Minnesotan. His love for the state and its citizens was second only to his love for his family.”

The following is a statement from Governor Mark Dayton:

“Governor Anderson was one of Minnesota’s greatest governors. His transformational ‘Minnesota Miracle’ – which he achieved through one of the most momentous bipartisan agreements in our state’s history – has dramatically improved the quality of our state’s public education.

“I offer my deepest condolences to his family and many friends.”

The following is a statement from Lt. Governor Tina Smith:

“Elected to the Legislature at age 26 and Governor at age 37, Wendell Anderson devoted his life in politics to proving that Minnesota is a state that works. He was beloved by staff, respected by his peers, and a mentor to generations of Minnesotans. Over the past decade, I was privileged to get to know Wendy, and I will always be grateful for his friendship. He will be deeply missed by his family and by all Minnesotans.”

The Life and Service of Governor Wendell Anderson

Wendell Anderson was born on February 1, 1933, in Saint Paul, Minnesota. He graduated from Johnson High School, and went on to attend the University of Minnesota, where he played collegiate hockey from 1951 to 1954. Anderson later earned a spot on the U.S. Olympic Hockey Team, winning a silver medal in the 1956 Winter Olympic Games in Cortina d’Ampezzo, Italy.

After serving in ROTC at the University of Minnesota, in 1955 Wendell Anderson enlisted in the United States Army as a Second Lieutenant, serving his country honorably in the U.S. Army through 1957.

In 1958, while attending law school at the University of Minnesota, Wendell Anderson ran for and was elected to the Minnesota House of Representatives at the age of 26, and was re-elected in 1960. Anderson was elected to serve in the Minnesota Senate in 1962 and 1966. He also served as chairman of Hubert H. Humphrey’s 1968 Presidential Campaign in Minnesota.

In 1970, then-Senator Anderson ran for Governor. At the age of 37, Anderson became one of the youngest Governors in Minnesota’s history, serving from January 4, 1971, through December 29, 1976. One of Governor Anderson’s signature accomplishments in office was securing the historic “Minnesota Miracle of 1971,” a momentous bipartisan agreement that reformed the financing of Minnesota’s public schools and local governments.

In 1976, Governor Anderson succeeded Vice President Walter Mondale in the United States Senate. Anderson served as a member of the Senate from December 30, 1976, through December 29, 1978, concluding his 20-year career in elected office. Throughout his service in public office, Governor Anderson embodied the spirit and aspirations of Minnesotans, earning a place in the hearts of our people and the history of our state.

Following his service in public office, Governor Anderson continued to serve the people of Minnesota as one of our state’s foremost public leaders. He practice law, worked on various business ventures, and served as a political commentator and mentor. Governor Anderson was also an honorary consul general for Sweden, and served on the University of Minnesota’s Board of Regents from 1985 until 1997.

Governor Anderson was married to Mary Christine McKee of Bemidji, Minnesota in 1963. Together, they raised three children: Amy, Elizabeth, and Brett.