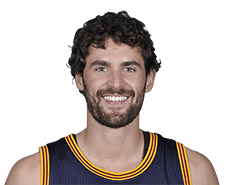 As the shots dropped, the score widened and the head-banging Cleveland crowd screamed louder, threatening to rip off the arena’s roof, Kevin Love raised his arms and gestured for fans to do more.

Usually, it’s the other way around.

Shaking off two miserable games in Toronto, Love, whose two seasons with the Cavaliers have ebbed and flowed like Lake Erie’s tides, scored 25 points in just three quarters of Game 5. Cleveland pummeled the Raptors 116-78 on Wednesday night to take a 3-2 lead in the Eastern Conference finals.

Love’s performance, which began with him knocking down a turnaround hook in the lane and finished with him going 8 of 10 from the field, restored his confidence, quieted detractors and showed his teammates he can deliver when needed. It also prevented the Cavs from facing a win-or-else situation in Game 6 on Friday night in Toronto, where they are 0-4 this season.

”Just a bounce-back for him,” said LeBron James. ”He knew he didn’t play his style of basketball or how he wanted to play to help us win in Toronto. He wanted to make a different outcome of it, and he did that. He’s a true professional.”

This was Love in peak form, an inside-outside threat and completely opposite from the player who made just 5 of 23 shots and was benched in the fourth quarter of Game 4 for Channing Frye. This is the Love the Cavs will need to finish off the Raptors and make a second straight appearance in the NBA Finals.

This is also the Love who along with James and Kyrie Irving completes Cleveland’s Big 3, a trio dependent on each third doing its part.

Love returned from Canada in a shooting slump and personal funk. He felt as if he had let his teammates down in Games 3 and 4. Love’s body language, the subject of constant speculation since he arrived from Minnesota in 2014, appeared that of a bruised, if not beaten, man.

His spirits were dragging. His teammates picked them up.

Love spoke to coach Tyronn Lue and then received a phone call Tuesday night from Frye, the savvy, 11-year veteran who has provided both points and perspective for his younger teammates.

”He basically just told me that no one’s immune to the NBA playoffs,” Love said of his pep talk from Frye. ”These types of things happen and you have to keep fighting through it in order for us to win. He said I needed to be aggressive, and I give him a lot of credit for staying on me and staying vocal.”

Love was in attack mode from the outset in Game 5. He demanded the ball, taking advantage of a mismatch against Raptors forward Luis Scola. Love scored Cleveland’s first basket and nine of the first 17 points. And after knocking down a 3-pointer – he made his first six shots – to give Cleveland a 27-16 lead, he summoned Cavs fans to bring the noise.

The game plan was to get Love some early touches near the basket and let his game expand.

”We always run plays to start the game for Kevin, hope he draws fouls or makes an easy shot down low in the paint,” Lue said. ”That kind of frees it up for him. When he starts inside-out, he’s able to do more on the floor.”

Love’s re-emergence was devastating to the Raptors, who need to do more to stop him to save their season. ”Kevin Love getting going hurt us, and the third wheel to get going,” Toronto coach Dwane Casey said. ”You can do some things against LeBron James, you can do some things against Kyrie Irving to slow them down a little bit, but when you’ve got that third guy in there that you’ve got to possibly double-team, you’re running all over the place. So we’ve got to do a better individual job on him and not let him get going.”

Lue said the support – OK, the love – that Love felt from his teammates since Game 4 made a difference. They know what he means to their title hopes, and weren’t going to abandon him.

Love, too, didn’t want to lose his teammates’ trust. So he pushed himself.

”He works hard every day, sometimes too hard,” Lue said. ”But he’s constantly in the weight room. He’s constantly doing conditioning, constantly working and shooting. That’s why when he misses a couple shots, it doesn’t bother me because he puts the time and puts the work in. Some nights he’s just not going to make shots.”

Love didn’t want to make too much of his Game 5 turnaround. But considering the stakes, it was colossal for the Cavs.

”More than anything, I just wanted to respond,” he said, ”just wanted to help us win in any way that I could. I don’t care if I went 0 for 30 and we got a win. Any way that we can win and I can help, I’m going to do it.”