You are here: Home / News / Franken in Cleveland: RNC is “banana republic” and “startlingly ugly” 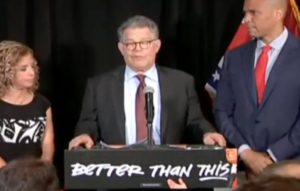 “Startlingly ugly,” says Senator Al Franken in Cleveland about the Republican National Convention. Franken called chants of “lock her up” directed at Hillary Clinton “very banana republic”:  “Negativity, ugliness that you have come to expect from Donald Trump, who started this campaign saying that Mexican immigrants were rapists and drug dealers.”  Franken also zeroed in on Trump’s comment that he saw thousands of Muslims on T-V cheering when the World Trade Center went down.  “He’s the only person who has seen that on T-V because it didn’t happen,” Franken says.

Franken stood with New Jersey Senator Cory Booker, reportedly one of those Hillary Clinton is considering as her running mate. Booker says it’s as if Republicans are now “a counter-factual party that has no interest in discussing ideas… but is seeking…a savage, vicious assault on the truth in order to achieve their ambitions.”