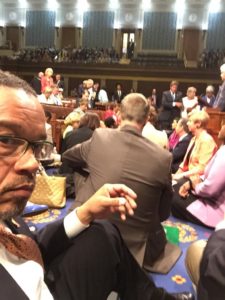 Senators Al Franken and Amy Klobuchar, Congresswoman Betty McCollum and Congressmen Keith Ellison and Rick Nolan are among dozens of Democrats staging a sit-in on the floor of the U-S House, demanding Republicans have a vote on what they call common-sense reforms to reduce gun violence. They want House Speaker Paul Ryan from Wisconsin to keep the House in session during a planned recess next week to deal with the issue.  There was a filibuster last week in the U-S Senate to force votes, but a number of gun-control measures failed there on Monday night.

Here’s a statement from Senator Klobuchar on the sit-in: “I went to the House floor to stand with my colleagues. I remain hopeful that continued negotiations will lead to a bipartisan vote to get better background checks and to prevent suspected terrorists from buying weapons.”