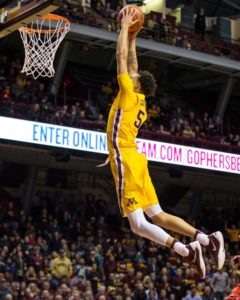 #5 Amir Coffey with a dunk (photo courtesy of Gopher Sports)

Freshman Amir Coffey scored 30 points to lead Minnesota to a 92-86 over St. John’s on Friday night.

Dupree McBrayer had 18 points, five rebounds and five assists, and Nate Mason added 13 points, seven assists and five rebounds for the Golden Gophers (4-0), who only turned the ball over six times.

Marcus LoVett scored 31 points on 11-for-27 shooting and Shamorie Ponds had 23 points and eight rebounds for St. John’s (2-1). The Red Storm led by 13 points midway through the first half, but shot just 37 percent to let the lead slip away.

Coffey made 9 of 14 shots and was 11 for 12 on free throws. Reggie Lynch grabbed 11 rebounds and blocked nine shots for Minnesota.

St. John’s blitzed the Gophers out of the gates, leading 22-9 eight minutes into the game. But Coffey, the son of former Minnesota standout Richard Coffey, keyed the Gophers response, a 32-9 finish to the half that helped them take control.

Bashir Ahmed added 15 points and 10 rebounds for St. John’s, which pulled within three points in the second half but couldn’t get closer.

St. John’s stays in the Big Ten with its next opponent, facing Michigan State on Wednesday in the Battle 4 Atlantis tournament in the Bahamas. The Gophers host another opponent with name recognition when Arkansas comes to town on Tuesday.