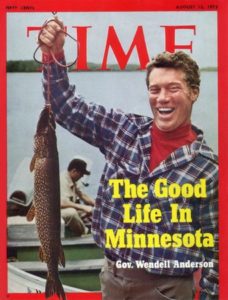 Memorial services are this afternoon (2pm) at Mount Olivet Lutheran Church in Minneapolis for former Governor Wendell Anderson, who died July 17th at the age of 83. A reception is an hour before the service and is also open to the public. Anderson was on the cover of Time magazine in 1973 holding up a big northern for an article entitled “The Good Life in Minnesota.” But he later got on voters’ bad side for an arrangement with Rudy Perpich to appoint him to the U-S Senate seat vacated by the death of Hubert Humphrey.