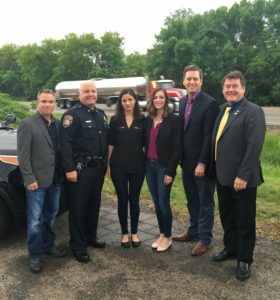 House Republicans today visited Highway 12 west of the Twin Cities — what they call the most dangerous stretch of road in the state — as they continue pushing Governor Mark Dayton to call a special session so the legislature can pass a bonding bill that died in the final minutes of the regular session. Angela Erickson, whose sister was killed in a crash on Highway 12 in February, says the accident “could have been prevented, and I’m sure many other families feel the exact same way that I do. It’s a tragedy that we even have to be here today to ask for a special session.” House Speaker Kurt Daudt (DOWT) says a group of Senate Democrats stood in the way of funding for critical roads and bridges. Democrats respond Republican game-playing over the Southwest Light Rail Line killed a bonding bill.