You are here: Home / Sports / Gopher basketball makes it eight wins in a row 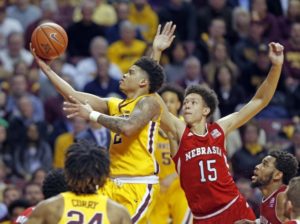 The reward for enduring the embarrassment of a year ago has resulted in quite the turnaround in coach Richard Pitino’s fourth season.

Nate Mason had 25 points in 28 minutes with his best shooting performance in Big Ten play, Jordan Murphy posted his sixth double-double in the last seven games and Minnesota breezed by Nebraska 88-73 on Thursday night.

”We’re all just clicking right now,” said Mason, who went 9 for 13 from the field.

Murphy finished with 20 points and 11 rebounds and Reggie Lynch had 11 points, six blocks and six rebounds as the Gophers (11-6, 23-7) overpowered the Huskers (12-17, 6-11) around and underneath the basket. Coach Tim Miles was weary enough of the interior imbalance that he switched to a 1-3-1 zone for a period early in the second half, and the Gophers promptly made three 3-pointers in less than 3 minutes.

”They can get you a lot of ways,” said Miles, whose job status has entered tenuous territory with 10 losses in 14 games following a 3-0 start to conference play.

Glynn Watson Jr. scored 14 points for Nebraska and Tai Webster had a quiet 11 points with eight rebounds, reaching double-digit scoring for the 30th straight game dating to last season’s finale. The third-leading scorer in the conference, who shot 4 for 13 from the floor, became the 15th player in program history to top the 500-point mark in one season.

Dupree McBrayer added 16 points and six assists for Minnesota, which will play at Wisconsin on Sunday with a chance at second place and a double-bye in the Big Ten tournament well within reach.

The Gophers, after going to overtime five times in Big Ten play, finally were able to relax down the stretch with a lead that grew as large as 24 points. McBrayer had the longest highlight reel with a pair of 3-pointers, a floater swished from the lane and a one-handed dunk off a drive during a 3-minute stretch of the second half. This was another well-balanced, unselfish performance reflective of the strong chemistry that has developed within the roster, featuring slick passing between perimeter and post players for a total of 21 assists.

”They were very, very confident,” Pitino said. ”But you know what? When you win eight games in a row in the conference, in the Big Ten, you’ve earned the right to be confident.”

With only two upperclassmen receiving regular playing time, the Huskers have been going through plenty of growing pains.

”Their confidence, their sense of history goes about as long as their timeline on Twitter,” Miles said. ”It’s one of those things that you have to constantly manage. There’s no doubt that when one thing goes wrong, there’s kind of a feeling. I didn’t see one strong voice out there trying to steady the ship.”

Miles, perhaps realizing he’s at a football school, said his team needs a ”quarterback” to emerge on the court as a leader.

”We don’t understand what’s going on right now,” sophomore Ed Morrow Jr. said, ”and I think we’re getting a little bit out of ourselves.” 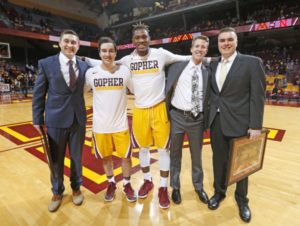 The two Gophers seniors were honored before and after the game: Akeem Springs, who has been a capable 3-point shooter, reliable defender and loquacious leader in his lone season as a graduate transfer, and Darin Haugh, a Minnesota native and former walk-on who took a mere 24 career minutes into his final home game.

Haugh walked into Pitino’s office last summer to tell him he needed a full-time job to pay for school and might not be able to stay on the team. Pitino had already planned to give him a scholarship. The student section’s chants for his appearance were rewarded with 3:54 left when a grinning Haugh checked in.

Nebraska: All that’s left is a long-shot run at the Big Ten tournament title. The Huskers are on pace for their fourth losing record in five years under Miles.

Minnesota: Twenty years since they reached their only NCAA Final Four, the Gophers have their best Big Ten record since going 16-2 in that sensational season. Only one other time since 1997 have they won 10 games in conference play: 2005 under coach Dan Monson.

Nebraska: The Huskers host Michigan on Sunday, trying to send Webster out strong in his final scheduled game at Pinnacle Bank Arena.

Minnesota: The Gophers aim on Sunday for their first win at Wisconsin in six tries since 2009. After beating Wisconsin on Jan. 22, 2014, Pitino’s first game against the Badgers, they’ve lost six in a row to their border-state rival.