You are here: Home / Sports / Gopher basketball moves to 10-1 with win over NIU 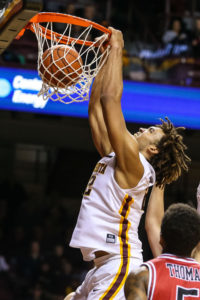 Reggie Lynch with the dunk (photo courtesy of Gopher Sports)

Reggie Lynch and Jordan Murphy each had a double-double and Minnesota pulled away to beat Northern Illinois 77-57 Sunday.

Lynch scored 11 of his career-high tying 18 points in the second half. His 11 rebounds were two off a career best.

Murphy had 12 points and 10 rebounds for Minnesota (10-1). Nate Mason finished with 11 points and Akeem Springs and Dupree McBrayer had 10.

”I played pretty good, but everyone all around did very well,” Lynch said.

”He just needs as many reps as he can, but I thought he was terrific today,” said coach Richard Pitino. ”To me, I think he’s one of the better centers in the league. . He’s a game-changer for us.”

Lynch feels like he’s had a groove the whole time.

”I know how to play the game,” he said. ”My teammates are finding me and everyone is playing really well. Even if I’m in a little bit of pain on defense or trying to score I know my team has my back.”

Lynch and Murphy combined for 12 of Minnesota’s first 21 second-half points as the Gophers, who led by six at the break, built a 50-38 lead. Springs, who played two seasons at Northern Illinois, had a 3-pointer and layup in that stretch.

Lynch says this was a tough game:

”I thought that Lynch, he came out and it seemed like he wouldn’t miss a shot in the first half. We tried to slow him down in the second half, but it just wasn’t enough,” said Northern Illinois coach Mark Montgomery.

Minnesota finished with a 48-28 rebounding advantage.

Minnesota finished with 17 assists on 24 baskets.

”I think our whole team is really, really willing passers,” Pitino said. ”They’re very unselfish. . They look like they’re having fun together. They’re constantly looking to share the ball.”

A smattering of cheers could be heard when Northern Illinois’ Wilson made a play. He went to high school about 10 miles from Williams Arena and was a finalist for the state’s 2015 Mr. Basketball award. He had 13 points in his first six games before Sunday.

Minnesota: The Gophers, who struggled in a 74-68 win over the New Jersey Institute of Technology on Wednesday but beat Georgia Southern by 37 on Friday, continue to seek offensive consistency. They shot just 30 percent in the first half despite a 5-for-21 start, but 53.6 in the second 20 minutes.

Northern Illinois: Plays its only home game in a 35-day stretch Wednesday against Olivet Nazarene. The Huskies have four road games in that span.

Minnesota: The Gophers are home Wednesday against LIU Brooklyn before a nine-day layoff for final exams.