(Stillwater, MN) — The final stop of the 2022 Golden Gopher “Coaches Caravan” was last night in Stillwater. Men’s basketball coach Ben Johnson, women’s basketball coach Lindsay Whalen, women’s’ gymnastics coach Jenny Hansen and wrestling coach Brandon Eggum all spoke to a crowd of Gopher fans. Whalen says it was good to get back out to see fans in person. She says it is an exciting time of year, as incoming freshmen are now on campus with the start of summer school this week. The “Coaches Caravan” had made previous stops in Chaska and Rochester. A previously-announced visit to Brainerd for later this month was canceled due to scheduling issues. 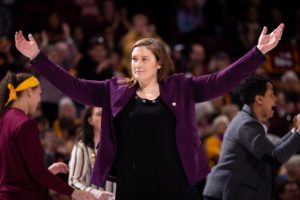 (Minneapolis, MN) — Golden Gopher men’s hockey coach Bob Motzko says summer workouts for his players have been going well during a chaotic time of year. Several current and future Gopher players are spending some of their summer with Team U-S-A for World Junior training, while others remain on campus for summer school and workouts. […]