(Minneapolis, MN) — Golden Gopher football defensive coordinator Joe Rossi is working from home like everyone else these days. He is mixing a heavy workload of virtual team meetings, recruiting calls, and game film breakdown with time with his two wife, two young children and brand new dog. Minnesota had quite a successful recruiting month in April and Rossi says much of that is because they created and maintained relationships with the prospective student-athletes and they have a great place to sell. In addition, four Golden Gopher defenders off of last year’s 11-2 team were drafted last weekend, so he is proud of Antoine Winfield Junior, Kamal Martin, Carter Coughlin (COFF-lin), and Chris Williamson. Rossi says all four worked hard and showed high character in putting themselves in a position to be drafted into the N-F-L.  The Gophers are 14-3 since Rossi took over in the midst of the 2018 season. 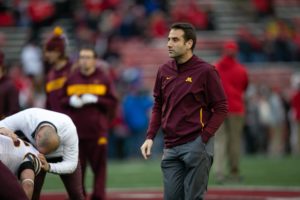