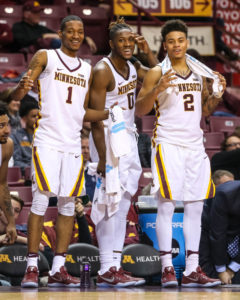 STARTING FIVE
• The Gophers return to Williams Arena for the first time in February, hosting the rival Iowa Hawkeyes in the lone meeting between the two teams. Minnesota is in the midst of a stretch of five straight games against teams they’ll only face once during the regular season.
• The Gophers’ win Saturday in Champaign marked three Big Ten road wins for the first time in a season since the 2011-12 campaign.
• In the latest edition of the NCAA Ratings Percentage Index (RPI) as of Feb. 7, the Gophers stand in 24th place. Minnesota is the fourth-highest ranked Big Ten team in the RPI rankings, behind Wisconsin (17th), Purdue (21st) and Maryland (22nd).
• Redshirt junior Reggie Lynch sits among the nation’s leaders in blocked shots. The Edina, Minn. native now has 68 blocks on the season, leading both the team and the Big Ten Conference and fourth nationally with an average of 3.1 blocks per game. He is spearheading the Minnesota team blocking effort which leads the Big Ten and ranks second in Division I at 6.4 blocks per game. Lynch is also steadily moving up the single-season records, as he is currently eighth among all-time Gophers in blocked shots. Randy Breuer holds the record of 87 blocks in the 1982-83 season.
• The Gophers will split their time between home and road games over the next three weeks. The Gophers will not have back-to-back Big Ten games at home until February 15 and 19 against Indiana and Michigan. Minnesota, along with Rutgers, is the only Big Ten team that will not have a two-game homestand until February – although the Scarlet Knights hosted Wisconsin on Jan. 28 at nearby Madison Square Garden in New York City and then hosted Iowa three days later in Piscataway.

(Minneapolis, MN)  —  Ta’Lon Cooper led five Minnesota players in double-figures by tying his season-high with 16 points, Pharrel Payne had 15 points, and Dawson Garcia added 13 points, but Michigan shot 52.4 percent and made 10-of-18 three-pointers in a 90-75 win over the Gophers at Williams Arena. Minnesota drops to 4-5 this season, 0-2 […]