You are here: Home / Sports / Gopher men’s basketball moves to 3-0 with dominant second half 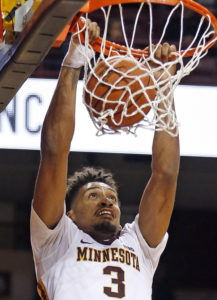 Much is expected from Minnesota’s Jordan Murphy this year.

After struggles in the team’s first two games, he was dominant Wednesday night.

The sophomore scored 18 points and added 12 rebounds and the Gophers pulled away to beat Mount St. Mary’s 80-56.

The Gophers, 3-0 for the first time in three years, also got 13 points each from Dupree McBrayer and Nate Mason.

A member of the Big 10 All-Freshman team last year, Murphy totaled 17 points on 5 of 17 shooting in wins over Louisiana-Lafayette and Texas-Arlington.

”Every time you step on the court it’s a new chance to see where you’re at skill-wise . and just see how you can impact the game,” said Murphy, who was 8 of 9 from the field.

”Sometimes he lets certain things zap his energy, whether he’s confused by something or whatever,” Pitino said. ”We just talked about playing through that is the most important thing.”

The Mountaineers were 7 of 27 on 3-pointers.

”This is the game where you got to make 14 to 15 threes. We are more than capable of doing that, but we are just coming up short right now and not having enough guys stepping in and knocking them down,” said coach Jamion Christian.

With Minnesota up 49-42, Murphy scored on a dunk, blocked a 3-pointer by Will Miller and scored on another dunk 5 seconds later. After a media timeout, he scored on a putback for a 13-point lead with 11:10 to play.

Back-to-back 3-pointers by Akeem Springs pushed the lead to 19. He and Amir Coffey each finished with 10 points.

”We don’t look at individually how we do,” Mason said. ”We’re just looking for the win.”

Minnesota was 14 of 23 from the free-throw line after shooting 72.2 percent in its first two games.

”It’s early in the season I think feeling comfortable up there,” Pitino said. ”Just got to be confident, stick to the routine.”

Last season, Mount St. Mary’s forced at least 17 turnovers in a game 18 times and 20 or more on eight occasions. In three games this season, the Mountaineers have forced an average of 12.3: West Virginia and Minnesota had 13 and Iowa State had 11.

Mount St. Mary’s: The Mountaineers live and die playing up-tempo, with an aggressive full-court pressure on defense and an offense that likes to shoot from beyond the arc. Mount St. Mary’s showed flashes on both ends, but needs to be more consistent, especially against teams with bigger post players.

Minnesota: The Gophers, who went 8-23 last year, including home losses to mid-majors South Dakota, South Dakota State and Wisconsin-Milwaukee, continue to advantageously use their depth. This was the third straight game at least five Gophers finished in double figures.

Minnesota is expected to have a tough test Friday when the Gophers welcome St. John’s as part of the Gavitt Tipoff Games. It will conclude a stretch of three games in five nights at home. The Red Storm (2-0) beat Binghamton 77-61 Monday.