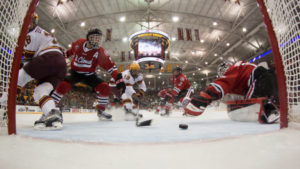 (Gopher Sports)  —  When the No. 12 Gopher Hockey program boarded its flight to New York on Thursday, it marked Minnesota’s first trip to the Empire State in over a decade – the first since winning the 2003 NCAA title at HSBC Arena in Buffalo.

It is also be the program’s first-ever trips to both Clarkson (Potsdam) and St. Lawrence (Canton).

Minnesota (2-2-0 overall, 0-0-0-0 Big Ten) hasn’t played Clarkson since 1993 and hasn’t played St. Lawrence since 1998 – meaning that in addition to zero members of the Gophers ever playing either of this weekend’s opponents, some of Minnesota’s players weren’t even born the last time Minnesota faced them.

Friday night’s game at Clarkson’s Cheel Arena will mark the fourth all-time meeting between the two programs and the first non-NCAA tournament game with the Maroon & Gold holding a 3-0-0 record against the Golden Knights. Saturday’s game at St. Lawrence’s Appleton Arena will be the fifth all-time meeting between the teams in the fifth different venue – Madison Square Garden III in 1966, Olympic Center in Lake Placid in 1988, Alfond Arena in Orono, Maine in 1989 and Mariucci Arena in 1998). The Gophers are 2-2-0 all-time against the Saints.

“It’s a business trip for sure.” 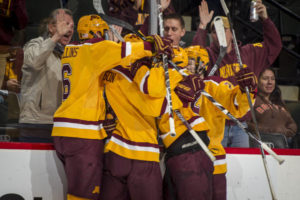 Practice How You Play

One of the most prominent topics at Wednesday’s media availability was a lesson learned in last weekend’s series against St. Cloud State and the steps being taken by the Gophers to adapt.

“This past weekend exposed the areas of our game that we have to work on,” Lucia said.

While Minnesota’s offense continues to thrive with an average of 4.8 goals per game, it’s goals against jumped up to an average of 3.0 with nine goals given up to the Huskies after just allowing just three combined goals in the first two regular-season games and the exhibition contest.

“The coaches actually structured practice a little differently. We’ve been working on a lot of wall battles…especially on the blue lines both offensively and defensively,” Johnson said. “We really need to focus on that this weekend.”

New Nickname for the Blue Line

Minnesota’s “Blue Line” of forwards (named for their blue practice jerseys) continued to receive praise from staff, teammates and the media on Wednesday following Jack Ramsey’s first career goal over the weekend.

The duo of sophomore center Darian Romanko and sophomore winger Jack Ramsey have skated together in all four games this season along with 26 games together last season as freshmen. The pair has seen their roles grow from newcomers last season to more ice time as sophomores including working together on the Minnesota penalty kill.

“I’ve been with Romanko for over a year now, so we’re starting to click pretty well,” Ramsey said. “We definitely have some on-ice chemistry.”

“I think they’ve been our most consistent (line),” Lucia said. “Those two players have played the game the right way with a little heaviness to their game. Whoever has played with them, that line has had the most success in the offensive zone. I’m not talking about rushes, but I’m talking about getting pucks back below the goal line and creating offense.

With many unwilling to refer to them as Minnesota’s fourth line of forwards, Ramsey was pressed for a new nickname for the group.

“I probably prefer the ‘trench line.’ What we had in juniors with the Penticton Vees, we had a ‘trench line’ that was always in the corners and what not…mucking and grinding.”