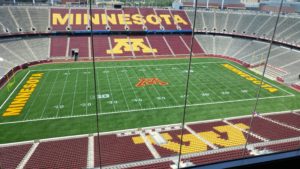 Quarterback Darell Garretson already has something that Oregon State lacked at the position at this point last season: Experience.

The transfer from Utah State who sat out last season will lead the Beavers when they visit Minnesota on Thursday night. Don’t expect him to be rattled under the lights on national television, coach Gary Andersen said.

”He’ll be in the moment. He loves football. He loves the games. That’s what he works so hard for,” Andersen said. ”And I think that – I hope that – it will be a calming feeling for some of the younger players who may be in the position to have a little more nerves than you’d want them to have.”

Freshman Seth Collins, as well as redshirt freshmen Marcus McMaryion and Nick Mitchell, all saw time at starter for the Beavers last season. None of them had played a snap in a college game.

Mitchell has since transferred. Collins announced that he was leaving, too, but then returned to Oregon State and will play at receiver this season. McMaryion remains, and looks to be Garretson’s backup heading into this season.

The Beavers finished 2-10 last season, not entirely unexpected after the team’s overhaul in Andersen’s first year after Mike Riley departed for Nebraska.

”A year ago right now the quarterback situation was just so experienced that kids hadn’t been in that spot,” Andersen said. ”To have Darrell, the position he’s in, where he’s been in big games. He’s played in big venues on the road. He’s one of the quarterbacks who has gone in and beaten BYU at their stadium. That’s hard to do. Not a lot of QBs have success there.”

Garretson passed for 2,586 yards and 18 touchdowns in two seasons at Utah State before he transferred to Oregon State in June 2015.

He was required to sit out a season under NCAA rules but that gave him time to study the Beavers’ offense that was installed under then-first-year coach Andersen.

”The redshirt year was hard, but I got to work on a lot of stuff, got to work on certain things you normally wouldn’t be able to work on during the season. The year off was beneficial, for sure,” he said at the start of fall camp.

Garretson emerged in the Beavers’ spring game and Andersen named him the starter shortly thereafter, clearly defining his role going into fall camp.

The Gophers went 5-7 last season before beating Central Michigan 21-14 in the Quick Lane Bowl in Detroit. Minnesota earned a bowl berth because there weren’t enough eligible FBS teams to fill the spots.

That season was marked by the departure of coach Jerry Kill because of health reasons. Tracy Claeys, an assistant under Kill for 21 years, took over as head coach.

Minnesota will be led by fifth-year senior quarterback Mitch Leidner, who threw for 14 touchdowns and 11 interceptions while running for six more scores last season – despite struggling with a foot injury that required surgery following the bowl game.