Coming off its worst offensive performance of the season, Minnesota will start a former walk-on quarterback at Maryland on Saturday.

Mitch Leidner was 13 for 33 for 166 yards and two interceptions in a 14-7 loss to Iowa. That wasn’t enough to get him benched. Leidner can’t play because of a concussion, so coach Tracy Claeys must rely upon junior Conor Rhoda to snap the Golden Gophers’ two-game skid. 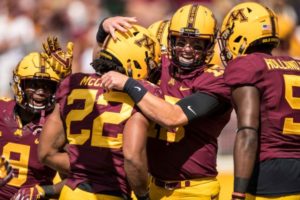 Rhoda has thrown one pass this season, a six-yard completion late in a 58-28 win over Indiana State. Now he’s poised for his first career start.

”He’s excited. I saw the big smile on his face,” Minnesota receiver Drew Wolitarsky said. ”Obviously we’re going to miss Mitch out there, but … we’re just going to take it with a grain of salt and go win it on the road.”

Perry Hills was injured in last week’s 38-14 loss at Penn State and is questionable for Saturday. If his sore shoulder remains a problem, true freshman Tyrrell Pigrome will get his first start.

Pigrome played the entire second half against Penn State but was unable to produce a score for an offense that came into the game averaging 43 points per game.

It wasn’t entirely his fault.

”We have a long way to go,” offensive coordinator Walt Bell said of Maryland’s attack. ”We’re not there yet. Last week, we just happened to be really far away from that.”

Minnesota (3-2, 0-2) never really got its offense in sync against Iowa.

”Just a lot of missed opportunities, really,” Wolitarsky said. ”It was frustrating to watch. Just small things, little gaps running backs missed, balls that should have been caught.”

Some other things to know about the first Big Ten meeting between Minnesota and Maryland: 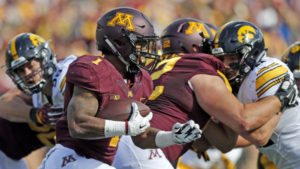 RUNNING WILD: The Golden Gophers have three players who have run for 100 yards in a game this season. Rodney Smith did it twice, Shannon Brooks gained 100 in a 29-26 overtime loss to Penn State two weeks ago and Kobe McCrary had 176 against Indiana State. ”These guys are elusive. They can break tackles,” Terps defensive coordinator Any Buh said. ”Several teams have had a hard time tackling them after first contact.”

MINUS TWO: Maryland first-year coach DJ Durkin has suspended special teams star Isaiah Davis for this game. Davis flattened the Penn State kicker Joey Julius long after the whistle blew. The Terrapins will also be without running back Trey Edmunds, who has a fractured right foot. The Virginia Tech transfer has 1,115 career yards rushing and 14 TDs.

DEFENSIVE LAMENT: The Golden Gophers allowed one touchdown to Iowa, a 54-yard run in the fourth quarter. But that proved to be the difference. ”We definitely played probably our most complete game, but there’s stuff we need to correct still,” linebacker Nick Rallis said. ”Fourteen points is still too much. We let up a big play in there.” Minnesota forced three turnovers and limited Iowa to 142 yards passing.

PROTECTING THE BALL: Maryland ranks first in the Big Ten and fourth nationally in fewest turnovers, losing the ball only four times. All four giveaways, however, have occurred in the last two games – two interceptions and two lost fumbles.

VIEW FROM THE OTHER SIDE: Minnesota’s defense knows all about Rhoda, who usually runs the scout team. ”He can sling the ball, trust me,” Rallis said. ”We’re fans of Rhoda of the defensive side because of what he’s done to us in practice. He can put it in there, and he can play football.”