You are here: Home / Sports / Gopher QB Leidner out for Saturday’s game 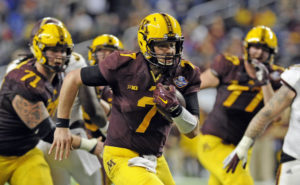 Minnesota has ruled out quarterback Mitch Leidner for Saturday’s game at Maryland because of a concussion.

The depth chart for the week released by the team on Tuesday listed junior Conor Rhoda as the starter and sophomore Demry Croft as the backup. Leidner didn’t show symptoms until after the game last week, coach Tracy Claeys said, when the Gophers offense struggled through a 14-7 loss to Iowa.

”He’s on the concussion protocol, so whenever he gets through that, then he’ll be cleared to play,” Claeys said, adding: ”I don’t want him to play until he’s healthy, and I’ll rely on doctors to tell me that.”

Leidner completed only 13 of 33 passes for 166 yards, with two interceptions against the Hawkeyes. Wide receiver Rashad Still and defensive end Tai’yon Devers were listed as out on the depth chart a week ago, and both of them were able to play by Saturday. Concussions are unpredictable, though, and Claeys didn’t express any optimism that the fifth-year senior would progress in time to face the Terrapins.

”Obviously we’re going to miss Mitch out there, but he’ll still be at practice, coaching Rhoda up, getting with him as well. We’re just going to take it with a grain of salt and go,” Wolitarsky said, adding: ”Just to see the amount of work he’s put in, and the amount of talent he came in with that he’s really crafted, it’s amazing.”

Rhoda joined the program as a walk-on from Cretin-Derham Hall High School in St. Paul, just a few miles east of campus. His only action this season came in the fourth quarter of Minnesota’s 58-28 win over Indiana State, and he has attempted just two passes in his college career. 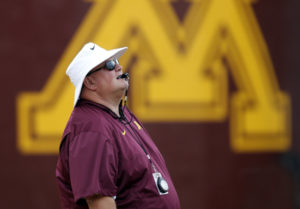 ”It’s going take us a couple days in practice to figure out the game plan and fitting it into what he does best,” Claeys said.

Claeys said the Gophers would prefer to use a redshirt season for Croft, who played a bit in relief of Leidner as a freshman. Leidner played through a painful left foot injury last year that required surgery, but he has started 27 straight games at quarterback for the Gophers since sitting out Sept. 20, 2014, against San Jose State.

”There’s other leaders on that offense,” said linebacker Nick Rallis. ”It’s nothing to worry about. That’s what we got a team for, you know?”

The matchup between Minnesota (3-2, 0-2) and Maryland (4-1, 1-1) is the first regular-season game between them. The Gophers will also be without senior right tackle Jonah Pirsig, who has a high sprain of his left ankle and will miss two to three weeks.