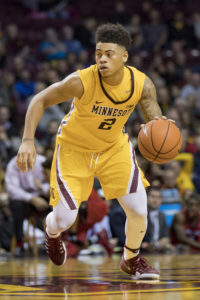 Nate Mason had 15 points and seven assists, and the Minnesota Golden Gophers had five players score in double figures in an 86-74 victory on Friday against Louisiana-Lafayette.

Dupree McBrayer added 15 points for Minnesota, which made 10 3-pointers and shot 40 percent from long distance. Amir Coffey, part of a three-guard starting unit with Mason and McBrayer, scored 13 points.

Bryce Washington scored 16 points and had 10 rebounds for the Ragin Cajuns, who couldn’t stay with the Gophers while shooting 31.9 percent from the field.

Minnesota committed 19 turnovers to 15 for Louisiana-Lafayette and was outrebounded 42-39, but the Gophers were helped with an efficient shooting attack from the outside to lead by as many as 27 in the game.

The Cajuns closed to 11 near the end of the first half, but Minnesota scored the final 11 points of the half, including a buzzer-beating 3 by Mason.

Louisiana-Lafayette: Trying to replace 66.2 percent of their scoring last season, the opener against a Big Ten opponent was unkind to the Cajuns. They shot just 27.5 percent from the field and were just 5 of 17 from 3 (29.4 percent) in the first half. Washington, one of the three returning starters, didn’t attempt a field goal in the first half. Freshman Justin Miller came off the bench to score 21 points.

Minnesota: The Gophers had a balanced effort as they try to discover their core this season with several new players joining coach Richard Pitino’s team. Coffey was the Minnesota Mr. Basketball last season. Center Reggie Lynch finally played his first game with the Gophers after transferring from Illinois State last season. Akeem Springs, a transfer from Milwaukee, had 11 points and hit three 3s off the bench.

Louisiana-Lafayette’s inexperienced roster will get used to playing on the road. The Cajuns start the season with two road games for the first time since the 2011-12 season when they play at Montana State on Nov. 14.

Minnesota’s home-heavy schedule against smaller schools continues Nov. 14 against Texas-Arlington. In all, the Gophers play their first six games at home and 12 of the first 14 at Williams Arena.