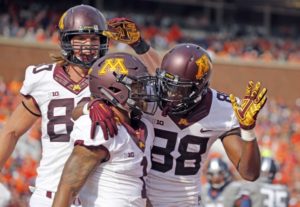 Rodney Smith rushed for 100 yards and two touchdowns and Minnesota turned a pair of early Illinois turnovers into scores on the way to a 40-17 win Saturday.

Smith’s first touchdown was a 20-yard burst up the middle with 2:16 left in the first quarter, giving the Golden Gophers (6-2, 3-2 Big Ten) the lead for good at 14-7. It followed a fumbled punt by Illinois’ Darius Mosely, recovered by Antione Winfield Jr. at the 20.

Thanks to the two early fumbles and a short punt, Minnesota started first-half drives at the Illinois 20, 9 and 49, and all ended with touchdowns.

Jeff George Jr., Illinois’ (2-6, 1-4) third-string quarterback and the son of Illini legend and longtime NFL quarterback Jeff George, started his second straight game and went 16-34 for 156 yards and a touchdown.

Illinois starter Wes Lunt suited up for the game but sat out his third straight game with a back injury. Second-string quarterback Chayce Crouch, injured in a win over Rutgers two weeks ago, did not dress for the game. Information about his condition was not immediately available. 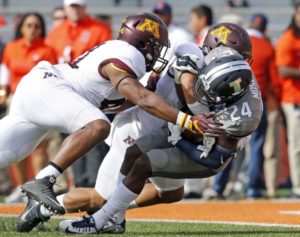 Minnesota: The Gophers get what in the end turned into a blowout win, a little payback for a loss at Illinois two years ago and guarantee themselves bowl eligibility. But they struggled for three quarters to put away a limited Illini team. The Gophers get full credit for turning the two early Illini turnovers into touchdowns, but without them this might have been much closer.

Illinois: Even if Lunt had played there’s no guarantee Illinois would be better off with him than George. Turner has been Illinois’ only real receiving threat this season. Illinois needs its defense, which coach Lovie Smith has called the strength of the team, to create the kind of turnovers that gave the Gophers short fields Saturday.

Minnesota: Minnesota has a good shot at win No. 7 next Saturday when it faces Purdue at home.

Illinois: The Illini get a second straight home game, hosting a Michigan State team that’s down but still considerably stronger that Illinois.