Trachsel comes to Dinkytown from Iowa State, where she led the Cyclones for one year following six at the helm of perennial NCAA Tournament contender North Dakota State. Her hiring at Minnesota will be official after a standard university background check is completed.

“Jamie is one of the country’s premier young softball coaches and we’re excited to bring her to Minnesota to lead our program and build on the success we’ve had in recent years,” said Athletics Director Mark Coyle. “Jamie’s leadership has consistently produced winning results. That track record, paired with her Midwestern roots and proven ability to develop the skills of her student-athletes throughout their collegiate careers, makes her the perfect fit for the Gophers.” 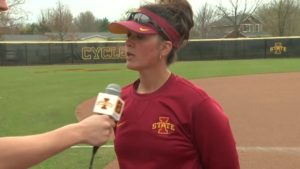 “I could not be more humbled and honored to lead the Gophers softball program, and I want to thank Mark Coyle and search committee for this tremendous opportunity,” Trachsel said. “While the decision to leave Iowa State was challenging, the opportunity that lies ahead at Minnesota to continue building a national powerhouse while returning to my home state is one that I could not pass up. The foundation that is in place is truly remarkable, and I look forward to meeting the team and helping these young women thrive as student-athletes. As a native of this great state, I have always admired how the University of Minnesota offers an athletic and academic experience that is second-to-none in the nation, and I am eager to work with our team and the University community to begin the next chapter of Gopher softball.”

A Duluth, Minn., native and former standout at St. Cloud State., Trachsel led the Cyclones to a fifth-place finish in the Big XII last season, garnering their highest conference win total in eight years along with the best regular-season league finish since 1994. Trachsel’s squad also saw improvement in the circle, dropping their team era by nearly two runs per game to the lowest since 2010.

Trachsel arrived in Ames following 14 seasons at North Dakota State, including the final six as co-head coach. In those half-dozen seasons, NDSU compiled a 221-109 overall record (.670), a 98-19 mark (.838) in the Summit League and advanced to NCAA Regional play five times. The Bison won their conference regular-season championship and the tournament championship five times each with Trachsel as co-head coach.

North Dakota State won at least 30 games – including a school-record 45 in 2015 when it climbed as high as 41st in the NCAA Percentage Ratings Index (RPI) – for 10 straight seasons.

The Bison advanced to the NCAA Regionals seven of the last eight years. The 2009 club won the Norman (Okla.) Regional to advance to the NCAA Super Regional in Tempe (Ariz.).

Through the course of her career, Trachsel has coached four All-Americans, 21 All-Region players and 55 All-Conference student athletes. She has also been on coaching staffs that were honored seven times, including NFCA Division I Midwest Region Coaching Staff of the Year twice (2009 and 2015). Trachsel is well respected among peers and lectured at the 2015 National Fastpitch Coaches Association convention on training drills for outfielders. She was featured in an ESPNW story for her tactical defensive skills.

Trachsel also helped transition the Bison program from Division II to Division I. After placing seventh and third at the Division II national championship in 2002 and 2003, North Dakota State moved up to the highest level in college softball.

As a player at St. Cloud State (1998-2000), she led the Huskies to three straight NCAA Division II tournament appearances and one conference title. Trachsel made the 1999 NCAA Division II All-Region Tournament Team and received All-Academic honors from the NFCA twice. SCSU won 127 games during her career.

Trachsel earned a B.S. degree in sports management (minors in coaching and human relations) from St. Cloud State in 2001. She added a Master of Education degree (in athletics administration) from North Dakota State in 2006.