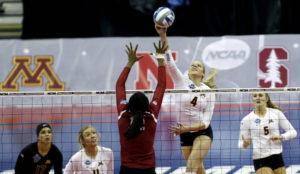 As a team, Minnesota had 55 kills, 73 digs and 13.5 blocks. Sarah Wilhite accomplished a double-double in her final match, with 25 kills and 13 digs. Alexis Hart had 11 kills, while Molly Lohman had eight with zero errors, hitting a team best .421. Paige Tapp had seven kills and five blocks, and Hannah Tapp had four kills with four blocks. Katie Schau had 12 digs, and Alyssa Goehner had 14. Dailanliz had a team best 16 digs, while Samantha Seliger-Swenson earned a double-double with 50 assists and 11 digs.

McCutcheon says the height of Stanford may have bothered the Gophers a bit:

McCutcheon says he is proud of his senior class:

Set 1: Stanford used a .320 hitting clip to win the first set, 26-24. After trading points, Stanford took an 11-8 lead as the Gophers called a timeout. After another point by Stanford, Wilhite responded with a kill. The Gophers came back to tie the set at 13-13 off a Lohman kill. Stanford took a 15-13 lead, but Hart added two kills to tie it back at 15. After Stanford again put it back to a two-point lead, Minnesota added three-straight off a block from Hart, a Wilhite kill and a Stanford attack error, as the Cardinal called a timeout. As the two teams tied at 23, Stanford pushed it to set point off a kill, but Hart pushed it back to a tie at 24. As Stanford pushed it to 25-24, Minnesota used its second timeout. The Cardinal, however, finished off the set after a long rally for a 26-24 first set win.

Set 2: Stanford used six blocks in the second set for a 25-19 win. Minnesota opened the second set with an 8-5 lead. The Cardinal, however, came back and tied the set at 9-9 as the Gopher called a timeout. Stanford later took a 17-13 lead off its 11th block of the match. Stanford took a 20-15 lead before Minnesota earned back-to-back points off a Gopher block and a Stanford attack error as the Cardinal called a timeout. Following the timeout Stanford built a 23-17 lead before a Lohman/P Tapp block put it at 23-18. Stanford finished it off with a kill for a 2-0 lead. 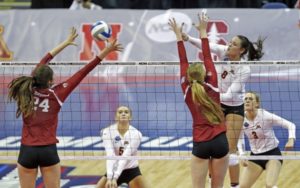