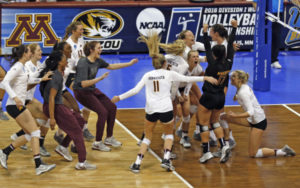 GOPHERS GOING TO FINAL FOUR
The University of Minnesota advanced to the NCAA Championship, Dec. 15 and 17, in Columbus, Ohio. The No. 2 seed Golden Gophers, face No. 6 Stanford at 6 p.m. CT, followed by No. 1 Nebraska and No. 4 Texas at 8:30 p.m. Winners of both National Semifinals move onto the championship match, Saturday, at 7 p.m.

GOPHERS IN THE NCAA
Minnesota has made it to 21 NCAA tournament appearances, and its second-straight NCAA Final Four. The Gophers are set to enter their fifth NCAA Championship appearance in school history (2003, 2004, 2009, 2015) and are looking for the school’s first volleyball national championship.

Big Ten Player of the Year Sarah Wilhite of Eden Prairie sat down this week with MNN Sports Director Mike Grimm and told him they are happy to get a second chance in the Final Four this year, after losing in the national semifinals a year ago: 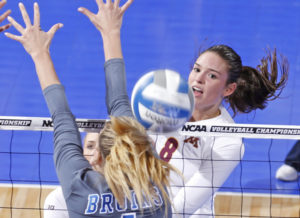 DID YOU KNOW?
Of the 64 teams to make it to the NCAA Tournament, Minnesota played 12 this season. Of the remaining three, the Gophers faced two during the regular season. Minnesota faced Stanford in the second match of the season, while the Gophers played Nebraska twice this year, both in Lincoln, Neb. and Minneapolis.

HOW THEY GOT HERE
Minnesota punched its ticket to the NCAA National Semifinals with a win over the UCLA Bruins, Dec. 10, at the Sports Pavilion. Minnesota started its NCAA journey with a pair of 3-0 wins over North Dakota and Hawaii in the First and Second Round. Holding the top seed in their region, the No. 2 seed Gophers hosted the Minneapolis Region as Missouri, North Carolina and UCLA came to the Sports Pavilion. Minnesota defeated Missouri, 3-1, and UCLA, 3-0, after the Bruins earned a 3-1 victory over UNC.

GOPHERS IN THE 2016 NCAA TOURNEY
Minnesota has dropped one set in the first four rounds of the NCAA Tournament. Like the regular season, Minnesota has a well balanced offense. Sarah Wilhite is averaging 4.69 kills per set this post season, followed by Paige Tapp with 3.00 kps, both Hannah Tapp and Alexis Hart average 2.77 kps, while Molly Lohman is at 2.46. Samantha Seliger-Swenson averages 12.85 assists per set, while the Gophers average 18.54 digs per set. Dalianliz Rosado has 65 digs in the 2016 tourney so far.

ABOUT STANFORD
Stanford enters the National Semifinal with a 25-7 overall record and went 15-5 in the Pac-12. The Cardinal punched their ticket to the NCAA Championship with a five-set win over No. 3 seed Wisconsin. As a team, Stanford is hitting .277 and averages 14.15 kills per set. One of the tallest teams in the championship, Stanford averages a nation-best 3.33 blocks per set. Leading the Cardinal offense is Kathryn Plummer with 398 kills, Inky Ajanaku with 329, Audriana Fitzmorris with 291 and Merete Lutz with 280. Jenna Grady has 1,087 assists, while Morgan Hentz has a team-best 576 digs.