You are here: Home / Sports / Gopher volleyball ranked No. 1 in country (AUDIO)

For the first time in 12 years, the University of Minnesota volleyball program is ranked No. 1 in the nation, announced today by the American Volleyball Coaches Association (AVCA). The last time the Golden Gophers were ranked No. 1 dates back to Sept. 27, 2004. 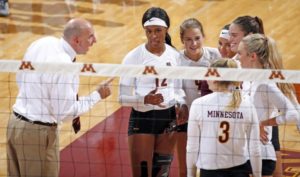 Hugh McCutcheon and the Gophers (photo courtesy of Gopher Sports)

With two road sweeps over Indiana and then-No. 14 Purdue and a Nebraska loss to then-No. 19 Ohio State, the Golden Gophers (12-1 overall, 4-0 in the Big Ten) claimed the top spot in the poll. Minnesota opened the season ranked fourth in the AVCA preseason poll. After a loss to Stanford, the Gophers dropped to No. 6, but have steadily climbed to No. 1 in the 2016 season. During the non-conference schedule, the Gophers faced six teams at the time that were either ranked or received votes. In conference action, nine Big Ten teams are currently ranked in the polls.

The Gophers battle No. 14 Penn State, Wednesday night in State College, Pa. Minnesota returns home for a Sunday afternoon contest against Northwestern at the Sports Pavilion.