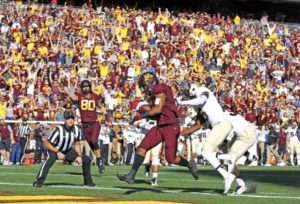 Smith topped the 100-yard mark for the fourth straight game and sixth time this season as Minnesota (7-2, 4-2 in the Big Ten) won its fourth straight.

Purdue quarterback David Blough threw four first-half touchdown passes. He ended the day with 391 passing yards, the fifth time he’s passed for at least 300 yards this year. De Yancey and Cameron Posey each topped 100 receiving yards with a touchdown for Purdue (3-6, 1-5), which lost its fourth straight.

Trailing 28-23 at the break, Minnesota’s Duke McGhee made a big play to give the Gophers defense a much-needed boost. McGhee made a tumbling interception, stripping the ball from Purude tight end Cole Herdman, on the first drive of the second half. After its offense scored to take the lead, Minnesota forced three straight three-and-outs against a Purdue offense that had rolled up 252 yards in the first half.

Early in the fourth quarter the Gophers turned another turnover into quick points. Minnesota’s Steven Richardson sacked Blough and forced a fumble that linebacker Julian Huff recovered at the Purdue 44. Two completions got the ball inside the 10, and Leidner scampered around left end for a 9-yard touchdown run and a 37-28 lead.

Purdue: The Boilermakers again were competitive in their third game since head coach Darrell Hazell was fired. But they continue to be plagued by second-half woes, being outscored 21-3 after the break.

Minnesota: It wasn’t always pretty, but the Gophers did what they had to do in winning their fourth straight game. Now the schedule gets tougher, with road games at Nebraska and Wisconsin sandwiched around a visit from Northwestern. Minnesota can still win the Big Ten West if it wins out.

Golden Gopher quarterback Mitch Leidner says they are right where they want to be:

Minnesota travels to Nebraska for a Saturday night clash with the Cornhuskers. Tickets are on sale for the Gophers’ final home game of the year against Northwestern in two weeks.