(Lake City, MN) — Golden Gopher women’s hockey standout Taylor Heise just finished her sophomore year of school by distance learning from her family’s Lake City home. She says it was stressful at times, but she also enjoyed her mother’s home cooking and spending time with her dad and two brothers, as well. She is studying to be a physical therapist and found herself on the all-academic team for the W-C-H-A. Heise was Minnesota Miss Hockey in 2018 with Red Wing and has been a top player for Minnesota for two years. She says the disappointment level was high after missing out on a chance to win a national championship earlier this year when the season was stopped due to COVID-19. Heise says it was especially hard to watch the season end in such an abrupt manner for her senior teammates. Now, she is focused on starting summer school in a few weeks, hoping to get back to campus soon, and having a goal in mind to compete for two national championships in her final two years with the Gopher program. She says the coaching staff has kept the team in touch, has kept them focused and disciplined and she looks forward to getting back on the ice soon. 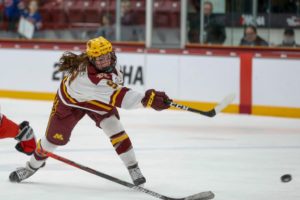