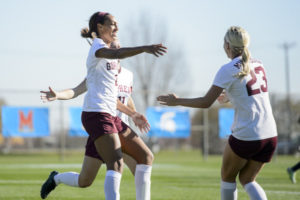 (Gopher Sports)  —  The University of Minnesota women’s soccer team will advance to the 2016 Big Ten Tournament championship final after a 1-0 shutout win against Michigan on Friday afternoon at the Elizabeth Lyle Robbie Stadium.

“Our team showed a lot of patience in this game and the best looks of the game came from our pressure,” head coach Stefanie Golan said. “We’ll get back to work tomorrow and will be ready on Sunday.”

Minnesota led all aspects of the game against Michigan, including: shots (13-7), shots on goal (5-3) and corner kicks (6-2). Josee Stiever led the Gophers with four shots.

In the eighth minute of the game, Julianna Gernes put the ball away off a cross inside the box off an assist from Stiever. Gernes has now scored in three-straight games, and Stiever leads the team with nine assists.

“To get on the board early was a good feeling,” Golan said.

Tarah Hobbs was credited the shutout, the 32nd of her career. Hobbs holds the program’s record in shutouts.

“It makes a big difference to play in front of a home crowd,” Stiever said. “To play with that kind of support is really special.”

The Gophers will host either Northwestern or Rutgers in the championship game, depending on the result of their semifinal match. The title game is set for Sunday, Nov. 6 with kickoff at 1 p.m. CT at the Robbie. Tickets are available at mygophersports.com.