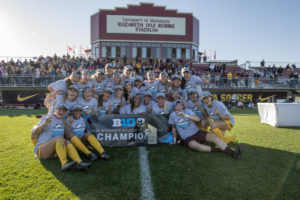 (GopherSports.com)  —  The University of Minnesota soccer team won the 2016 Big Ten Women’s Soccer Tournament after a 2-1 decision over Rutgers on Sunday afternoon at Elizabeth Lyle Robbie Stadium. This is the second time the Gophers have won the tournament in program history (1995, 2016), and first time Minnesota has won both the regular season and tournament titles. The Gophers’ record moves to 16-3-3 on the season.

“For this team to set their sights on these goals, and accomplish them is huge.” head coach Stefanie Golan said. “We definitely will enjoy this win. I’m proud of the heart shown by this team.”

In the 27th minute, junior Sydney Squires made a run past the Rutgers’ back line to find the back of the net. Nikki Albrecht and Josee Stiever were credited with the assist. Stiever now has ten assists on the season.

“There was a shift in the first half where we found our rhythm,” Golan said. “When we are at our best, our press is on and we’re being smart with the ball.”

Minnesota went into halftime with a 1-0 lead.

Rutgers’ Chantelle Swaby was able to get the Scarlet Knights on the scoreboard in the 84th minute. The score moved to 1-1.

Less than one minute later, sophomore Emily Heslin responded. Heslin scored off a long ball from the top of the box through traffic to give Minnesota the game-winner. It was Heslin’s first goal of the season and second of her career. 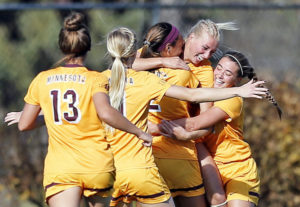 “I’ve been wanting a goal from the top of the box this whole season,” Heslin said. “It finally happened. I didn’t want to go into overtime… I saw the opportunity and was able to hit the ball right past the goalkeeper.”

The Gophers led the game against Rutgers in shots (15-10) and shots on goal (8-4). Minnesota and Rutgers both had five corner kick opportunities. Simone Kolander led Minnesota with five shots, four on goal. Tarah Hobbs tallied three saves in the win.

“We’re going to be preparing for the NCAA Tournament, we definitely want wins there,” Stiever said. “Hopefully we’ll be able to host and play in front of our fans, it’s really special.”

With the tournament title, the Gophers have earned an automatic bid to the NCAA Tournament. Minnesota will find out its seed, opponent and game location in today’s NCAA Selection Show at 3:30 p.m. CT.