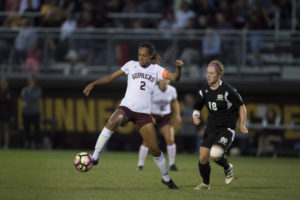 The University of Minnesota women’s soccer team will host Maryland the the regular-season finale on Wednesday, Oct. 26. Kickoff is set for 7 p.m. CT at Elizabeth Lyle Robbie Stadium.

The Gophers will play for the Big Ten regular-season title on Wednesday as they look to improve their conference record to 7-1-3. Minnesota is currently tied for first in the conference standings with Northwestern and Penn State. If each of the three teams win on Wednesday, the conference will have tri-champions.

SCOUTING MARYLAND
The Terrapins head to Minnesota with a 3-14-1 (1-9-0) record. Chelsea Jackson and Jarena Harmon lead Maryland’s offense with 17 goals between the duo. Minnesota and Maryland have met twice in history, with the all-time record tied at 1-1-0. The Gophers won the last meeting in a 1-0 decision in 2014.

IN THE RANKS
Minnesota has moved up to No. 11 in the latest National Soccer Coaches Association of America (NSCAA) poll. This is the tenth-straight week the Gophers have been in the top 20.

LAST TIME OUT
The Gophers recorded a double overtime draw at Northwestern after 110-minutes of play resulted in a 0-0 score. Minnesota’s offense tallied 16 shots, while the Gophers defense and goalkeeper Tarah Hobbs recorded another shutout. Hobbs now has 31 on her career, a program record. 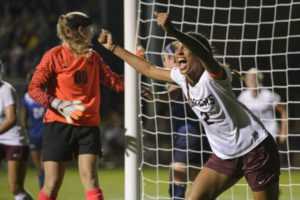