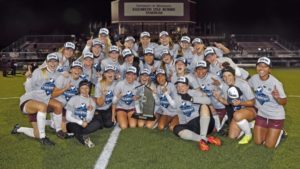 (Gopher Sports)  —  The University of Minnesota women’s soccer team earned a share of the Big Ten regular season title after recording a decisive 6-0 win over Maryland on Wednesday night at the Elizabeth Lyle Robbie Stadium. This is the fourth Big Ten title in program history, and the first under head coach Stefanie Golan’s leadership.

“This win is amazing, there’s no other way to describe it,” co-captain Josee Stiever said. “We’ve been looking forward to this, we’ve worked for it, it means the world to us. We were all aware of the opportunity in front of us and we were ready to seize the moment.”

Minnesota finished the regular season with a 13-3-3 record, 7-1-3 in conference play. Penn State and Northwestern also posted 7-1-3 records in Big Ten action to split the title. It was the first time there was a three-way split in conference women’s soccer history.

Julianna Gernes earned the first goal for the Gophers early in the fifth minute of play off big cross from Stiever.

In the 40th minute, Sydney Squires scored her first of the match on an unassisted run.

It was a family connection in the 66th minute, as junior Kellie McGahn found the back of the net from senior Simone Kolander. The duo are first cousins. McGahn has now scored three in the past five games after going two seasons without a goal.

Squires scored again in the 72nd minute off a ball from Fiedler.

Maya Rajacich was able to capitalize on a penalty kick to give the Gophers a big 6-0 win. 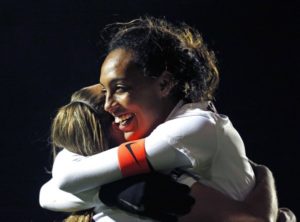 Kolander celebrates with a teammate (photo courtesy of Gopher Sports)

“Everything just clicked tonight,” Kolander said. “There were so many people on the scoreboard with goals and assists, it feels awesome.”

“To win on our own field is amazing,” Kolander said. “I love this field, I’ve loved it since I was a recruit… the fans were awesome through the cold. We can’t wait to be back.”

The Gophers will have another opportunity to play at the Robbie as they’ve qualified as the No. 1 seed for the 2016 Big Ten Women’s Soccer Tournament. The Gophers will host Indiana in the Quarterfinals this Sunday, Oct. 30 with kickoff set for 2 p.m. CT. Tickets will be available Thursday morning at 9 a.m. CT.