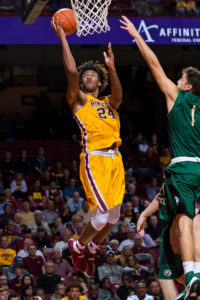 Leading the way for the Gophers was sophomore Jordan Murphy, who poured in a game-high 22 points on 9-for-12 shooting. Freshman Eric Curry had a strong debut in his unofficial first game, posting a double-double with 17 points and 14 rebounds. Also scoring in double figures were sophomore Dupree McBrayer and redshirt junior Reggie Lynch, who chipped in 18 and 10 points, respectively.

Minnesota saw scoring contributions from eight different players and out-shot the Beavers by a 47-to-35 percent margin, while winning the rebound battle 46-43 and committing six fewer turnovers. Defensively, the Gophers swatted 13 shots, including five blocks by Murphy and four from Lynch.

After an evenly matched beginning of the game, both offenses struggled finding the net. Bemidji State maintained a small lead, bringing the score to 17-11.

Minnesota began to catch up with Amir Coffey and Eric Curry free throws connecting to cut the gap to 21-18. After closing to within a point, Murphy scored a pair of layups giving Gophers their first lead at 29-27 with 2:14 left in the half. Ahmad Gilbert Jr. hit the Gophers’ first 3-pointer at 00:39, and the first half ended with a Curry layup, sending Minnesota to the locker room with a 38-29 lead.

Gopher forward Murphy says they were ready for this one: 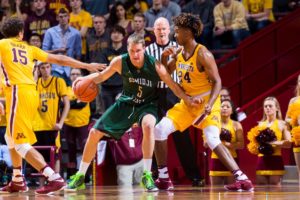 The Beavers opened the second half with a 9-6 run, including threes from Green and Peyton Dibble to cut the Gophers advantage to 44-38. At 13:57, McBrayer boosted the Gophers’ lead to double digits, 54-44.

Bemidji State could not return the margin to single digits, as the Gophers opened up a lead as large as 26.

Six different Gopher players made their debut in Maroon and Gold, as graduate student Akeem Springs along with freshmen Michael Hurt and Brady Rudrud saw action along with Coffey, Curry and Lynch.

The Maroon and Gold officially begin their season next Friday, hosting Louisiana Lafayette at 7:00 p.m.

The Beavers begin the regular season Friday, Nov. 11 with a trip to Wisconsin Dells, Wis., for a pair of games. BSU first plays Lindenwood University at 5:30 p.m. followed by a tilt versus University of Central Missouri on Saturday, Nov. 12.