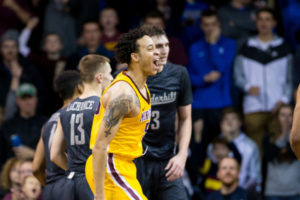 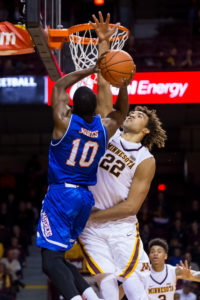 STARTING FIVE
• The University of Minnesota men’s basketball team opens a five-game homestand to conclude non-conference play, starting Tuesday night as they host the New Jersey Institute of Technology.
• Minnesota’s win over Vanderbilt on Saturday gave them a 7-1 record, earning them that record for the first time since 2012. The Gophers received a vote in the Associated Press Top 25 Poll for the second consecutive week, and sit eighth in the NCAA RPI (as of Dec. 5).
• With graduate student Akeem Springs tying for the team high of 11 points on Monday evening in Tallahassee, the Gophers have now seen six different players be their leading scorer. Along with Coffey (three times) and Mason (twice), Dupree McBrayer, Reggie Lynch, Jordan Murphy and Springs have all held or shared the top scorer title.
• Redshirt junior Reggie Lynch blocked six shots in Sioux Falls Saturday against the Commodores, helping his continued ascent up the national rankings among shot blockers. The Edina, Minn. native now has 25 blocks on the season, leading both the team and the Big Ten Conference and ranking sixth nationally with an average of 3.6 blocks per game.
• Jordan Murphy recorded his third double-double of the season (12th career), as he led the Gophers with 16 points and a season-high 14 rebounds against Vanderbilt. Murphy’s previous best this season had been 12 rebounds each in his first two double-doubles. Murphy was the lone Minnesota player to reach double-figures, and he made 8-of-17 field goal attempts in the game.

SCOUTING THE HIGHLANDERS
• NJIT comes to Minneapolis for the first time with a record of 5-4, including a 75-74 road win over UMass Lowell in the Bay State on Saturday night.
• The Highlanders have won two straight after a home victory over St. Francis (Pa.). NJIT faced one other Big Ten school thus far, falling 79-68 at Purdue on Nov. 26.
• Damon Lynn leads NJIT in three categories: scoring (23.0 ppg), assists (3.9) and steals (2.8).
• NJIT joined the Atlantic Sun Conference last season, after spending several seasons as a Division I independent.

GOPHERS VS. THE A-SUN
• Minnesota is 5-0 against the current members of the Atlantic Sun Conference.
• Those five wins came against Jacksonville (twice); Kennesaw State, Lipscomb and North Florida.
• The Gophers last played an ASUN foe in 2012 defeating North Florida 87-59 at the Barn.
• Head coach Richard Pitino is 1-1 against current ASUN members, defeating Stetson and falling to Florida Gulf Coast during his one season as head coach at FIU. 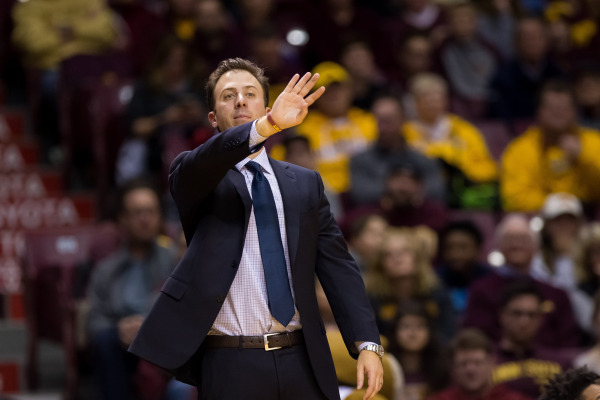