You are here: Home / Sports / Gophers hold off Beavers 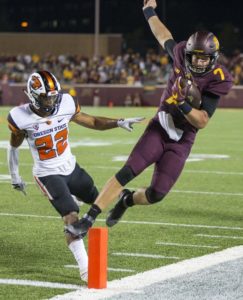 The Minnesota Golden Gophers scored 13 unanswered points in the fourth quarter to rally past the Beavers 30-23 in Minneapolis. Gopher running back Rodney Smith and quarterback Mitch Leidner both ran for two touchdowns and freshman defensive end Tai’Yon Devers (DEE-vers) forced two fumbles to help the cause. Leidner finished 13-of-26 for 130 yards through the air for Minnesota.

Leidner says they did make too many mistakes.