1. Minnesota and Illinois meet for the 74th time on Saturday with the Golden Gophers leading the all-time series, 40-30-3. The Gophers have won the last two in the series, outscoring the Illini 81-31, and are winners in five of the last six matchups between the schools. In Minneapolis, Minnesota holds a 23-12-2 record in the series, including wins in each of the last four meetings. In those four games, the Gophers have outscored the Illini, 123-64, an average final of 31-16.

2. The Golden Gophers have one of the strongest rush defenses in the country, ranking eighth nationally and second in the Big Ten by allowing 92.9 rushing yards per game this year. The national average for rushing yards per game through Oct. 30 is 164.8 yards per game; only one Gopher opponent has even gone above 144 yards rushing this year and only three have had more than 104 rushing yards. In fact, Minnesota had a two-game stretch of just 3 yards allowed (-19 at Colorado, 22 vs. Bowling Green). The -19 rushing yards allowed at Colorado on Sept. 18 are the fewest by any FBS team this year with the next fewest coming when Western Kentucky held FIU to -17 on Oct. 23. The next fewest among Power 5 teams came also on Oct. 23 when Wisconsin held Purdue to -13 on Oct. 23. Minnesota is third nationally in fewest opponent rush attempts (221), eighth in opponent rush yards (743), 16th in opponent rushing touchdowns (7) and 20th in opponent yards per carry (3.36).

3. For the second straight game, Minnesota true freshman Mar’Keise Irving and redshirt freshman RB Ky Thomas both ran for over 100 yards Saturday at Northwestern. Last week, Irving went for 105 yards and a TD, while Thomas had a career-high 139 yards and a score against Maryland on Oct. 23. This week, Irving ran for a career-high 110 yards and two touchdowns on 19 attempts and was named Big Ten Freshman of the Week, while Thomas had 106 yards on 21 carries at Northwestern. Until last week, no Minnesota freshmen had run for at least 100 yards in the same game since at least 1942. Now, Irving and Thomas are the first Minnesota duo to go for 100 yards in consecutive weeks since Laurence Maroney and Gary Russell did so at Michigan (10/8/05) and versus Wisconsin (10/15/05). Minnesota has had five individuals run for 100 yards this year for the Gophers, something the Gophers have not had since at least 1942. In fact, Minnesota is the only FBS team this season to have five different individuals reach 100 yards.

4. Minnesota’s four-game winning streak is its longest since winning the first nine games of the 2019 season. All four wins in the streak have come in league play, making it the longest conference win streak since winning six in a row in 2019. Prior to that, the Gophers had won four straight in the Big Ten just twice (2016 and 2013) since 1990. A win Saturday against Illinois would give Minnesota its second five-game win streak in the Big Ten since 1970. 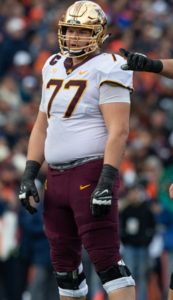 The University of Minnesota football team has accepted an invitation to compete in the Guaranteed Rate Bowl on Dec. 28, 2021, in Phoenix, Ariz. The Gophers, who went 8-4 in the regular season and 6-3 in the Big Ten, will face West Virginia from the Big 12. This will be the first-ever meeting between the […]