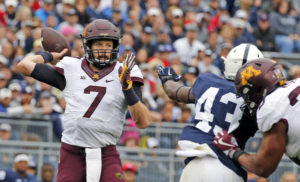 The University of Minnesota football team will be back out on the practice field today, getting ready for this Saturday’s game against Iowa.  The Golden Gophers will host the Hawkeyes at 11 A-M at T-C-F Bank Stadium.  Both teams are coming off of disappointing losses last week.  Minnesota let a late lead slip away at Penn State in overtime, while Iowa came up short at home in a late rally attempt against Northwestern.  Both teams have hopes of contending in the Big Ten West Division, so Saturday’s outcome will have a big impact.

Gopher senior quarterback Mitch Leidner of Lakeville sat down with MNN Sports Director Mike Grimm to preview Saturday’s border battle with Iowa and the goal of winning back the Floyd of Rosedale trophy: 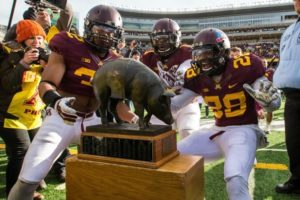