You are here: Home / Sports / Gophers host Rutgers for Homecoming 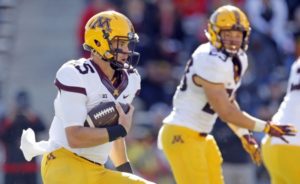 After opening the Big Ten season on a two-game skid, Minnesota found a way to right itself with a backup quarterback.

Rutgers is hoping for similar results this week.

Coach Chris Ash has elevated Gio Rescigno to starter for the remainder of the season, hoping that his solid play in the second half against Illinois last week can help the Scarlet Knights (2-5, 0-4 Big Ten) get that elusive first conference victory.

Last week the Golden Gophers (4-2, 1-2) started Conor Rhoda in place of the injured Mitch Leidner, and the junior played mistake-free football to help them beat Maryland, 31-10.

”We tried, obviously, a lot of different quarterbacks,” Ash said. ”This is not to blame the quarterback position or to blame Chris (Laviano). We have not produced on offense here in the last four weeks, when you’ve got four games, you’ve got 14 points, it’s not good enough.”

Rhoda is expected to start his second straight game for the Gophers. Leidner was able to return to some light work in practice this week after suffering a concussion against Iowa on Oct. 8, but coach Tracy Claeys said earlier in the week that it would be difficult for him to get enough practice reps to be ready to play on Saturday.

For the Gophers, a bigger concern is not taking Rutgers lightly. Prior to a 24-7 loss to Illinois, the Scarlet Knights were outscored a combined 136-0 in losses to Ohio State and Michigan.

”You worry about yourself, and if you want to have an opportunity towards the end of the year, you’ve got to play your best each and every Saturday, and have respect for your opponent,” Claeys said. ”You prepare for them. And if you don’t, then something’s going to happen.”

Here are some things to watch this week:

APPRECIATIVE RHODA: The former walk-on made his first career start last week at Maryland. And he tried to soak up the experience. ”Before the game I kept walking out there and looking at the field and it was an experience that I will never forget,” he said. ”Definitely if I get that opportunity to play this week that will be a whole other experience doing it in front of a home crowd and I’m sure a bunch of my family will be able to make it and there will be that much more of an experience to be able to do it at home.”

LINGEN IMPROVING: Minnesota tight end Brandon Lingen figured to be one of the team’s top pass catchers this season. But he needed surgery after a Week 2 win over Indiana State to repair a broken clavicle. He caught one pass for eight yards last week and Claeys said he will get more work this week. ”It’s hard to just jump in there and play a whole bunch all of a sudden, and so I will work him in more and more,” Claeys said.

WEARY RUTGERS: The Scarlet Knights are one of two Big Ten teams that has yet to have a bye, and Ash said it is taking its toll on a banged-up group. ”It’s tough, especially when you don’t have the type of depth that you really feel like you need to go out and play in a physical league like we do,” Ash said. Rutgers will have a bye next weekend.

LAVIANO DEMOTED: Ash bent over backward this week to make sure Laviano did not shoulder the blame for the team’s struggles. In seven games, he completed just 48.3 percent of his passes with five touchdowns and two interceptions. ”Chris has done everything that he’s been asked to do,” Ash said. ”He’s changed his attitude. He’s changed his work ethic. His commitment level to the football team has been sky high. He’s provided tremendous leadership for the other members of the offense.”