Barkley finished with 63 yards on 20 carries for Penn State (3-2, 1-1 Big Ten) and Trace McSorley completed 19 of 40 passes for 335 yards and a touchdown. McSorley added 73 rushing yards and another score for the Nittany Lions, who battled back from a 13-3 halftime deficit to salvage momentum in a season already soured by injuries.

“I think it was definitely something our players needed,” Penn State coach James Franklin said. “Everyone needed it, there’s no doubt about it.”

Mitch Leidner completed 24 of 40 passes for 241 yards with a touchdown, and Rodney Smith and Shannon Brooks added 104 and 100 rushing yards, respectively, for Minnesota (3-1, 0-1 Big Ten). Brooks and Drew Wolitarsky scored touchdowns for the Gophers and Irvin Charles hauled in an 80-yard score for Penn State. 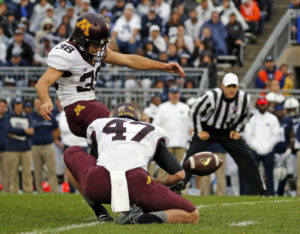 Emmit Carpenter kicked four field goals for Minnesota, including a go-ahead 37-yarder with 54 seconds to go. But Tyler Davis’ third field goal, a 40-yarder with two seconds left, forced overtime. Carpenter’s 46-yarder put Minnesota up after the first half of overtime before Barkley ended it on the next play.

Penn State’s star running back was bottled up for much of the afternoon and was forced to the sideline when it appeared he was hurt in the first half. Barkley averaged just two yards per carry before his game-sealing run. 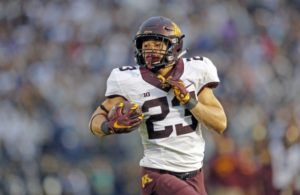 MINNESOTA: The Gophers are a scrappy bunch and will have a shot to hang with a lot of Big Ten teams with Leidner and their running backs playing well.

Leidner bounced back from a shaky start where he was 0 for 4 against the blitz to complete his next five passes for 35 yards and a touchdown against extra-man pressures.

PENN STATE: After falling into a 13-3 halftime hole and going 0 for 7 on third downs over the first two quarters, Penn State salvaged some momentum with a win. More importantly, Joe Moorhead and the offense got on track with big plays in the third quarter where Penn State racked up 190 yards of offense with 156 of them coming on deep passes against Minnesota’s shorthanded secondary.

MINNESOTA: Will try to take the Floyd of Rosedale back from the Iowa Hawkeyes at TCF Bank Stadium on Oct. 8.