You are here: Home / Sports / Gophers at Maryland tonight

A regular-season title in the Big Ten Conference may be out of the question now, but No. 24 Maryland is still playing for postseason seeding in the NCAA Tournament.

Minnesota, meanwhile, may be playing for postseason seeding.

The Terrapins lost 71-60 on Sunday at then-No. 14 Wisconsin, which left the Badgers in a tie for first with Purdue at 11-3 in the conference.

The Gophers entered play Monday tied for fifth in the conference with Michigan State at 8-6. Minnesota is coming off an 83-78 overtime win Sunday against Michigan. 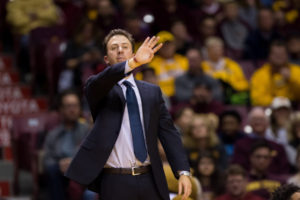 Minnesota improved to 3-2 in overtime conference games this season.

Minnesota is scoring 75.4 points and giving up 68.6 while shooting 43 percent from the field and allowing opponents to make 40 percent of their shots.

The Gophers had a 44-31 edge in rebounds in the Sunday win.

“Rebounding wins in this league,” McBrayer told reporters. “We’ve tried to stay focused on that.”

The Terps are led by junior point guard Melo Trimble, who is averaging 17.6 points and has 95 assists.

Maryland freshman guard Anthony Cowan is averaging 10.4 points and has a team-high 101 assists, while Huerter is averaging 8.9 points.

Maryland is scoring 74.9 points per contest and allowing 66.9. The Terps are shooting 37 percent from 3-point range while opponents are making 32 percent from long distance.

Trimble did not play the last 4:32 at Wisconsin on Sunday.

“He was tried. He was carrying us,” head coach Mark Turgeon said. “He missed two free throws that he never misses. He was tired. If we would’ve made a little run, I would’ve put him back in. But we have four more games in 10 days.”

“Coach took me out. I thought I was going to get a breather but I winded up not going back in,” Trimble said. “The game was pretty much pushed out to the point where there was no point for me to go back in.”

Trimble was named the conference player of the week on Monday after he averaged 29.5 points in two games against Northwestern and Wisconsin.

He has scored at least 10 points in a game 25 times this season and has done so 16 games in a row. Trimble had 32 points at Wisconsin and is just the 11th Maryland player to reach 30 points in a game three times in his career. He is now 10th in school history with 30 games of at least 20 points.