Ritter has been an assistant coach at the University of Minnesota since the 2008 season churning out the top hurlers in program history. She has been a mainstay in the Minnesota softball world since her days as a top pitcher from 2001-2004.

“I am excited for the future of our softball program,” said Athletics Director Mark Coyle. “Piper has been part of our team for nearly two decades, and she is the right person for the job. She was one of the best players ever to wear the Maroon and Gold and consistently developed All-American talent as an assistant coach. Her dedication to Minnesota, meticulous work ethic and attention to detail will serve her well as she makes the transition to head coach.”

“The University of Minnesota has given me so much and helped shape the person I am today,” Ritter said. “I am thankful to Mark Coyle and the search committee for this opportunity and am excited for the future of the program. I am honored to be a Gopher, and I look forward to continue working with our amazing Minnesota student-athletes.”

In her playing days, Ritter earned All-Big Ten honors all four years at Minnesota, including a first-team selection in 2003 when she posted 11 shutouts and what was then a single-season record 311 strikeouts. She also garnered NFCA All-Mideast Region accolades three times during her career and led the Gophers to the NCAA Regional Tournament two times (2002 and 2003).

Prior to joining the staff at Minnesota, Ritter served as pitching coach at the University of Northern Colorado for the 2006 season and was an assistant at North St. Paul High School during 2005. After graduating from Minnesota in 2004 with a degree in Kinesiology, she played and coached for one season in the Netherlands. Ritter also played one season in the National Pro Fastpitch League for the Texas Thunder, posting a 3-0 record with a 0.64 ERA.

Former Gopher head coach and current Stanford head coach Jessica Allister…”What a great day for Minnesota softball. Piper Ritter is widely regarded as one of the best pitching coaches in the game. The steady stream of All-American pitchers she has produced over the past seven years speaks for itself. Gopher softball is in great hands!”

Michigan head coach and winningest coach in NCAA softball history Carol Hutchins… “She is a great Minnesota woman and now she gets to lead Minnesota. She offers so much. The timing is perfect for her and she is ready. She’s always been a great pitching coach, but she understands the game. She is going to understand what she needs to do. Being the head coach is so much more than just coaching the game. It’s about leading women and she’s going to be great. I’m happy for her.”

Three-time All-American Gopher pitcher Sara Groenewegen… “I couldn’t be happier for Coach Ritter. Her passion for this program is invaluable. She helped me grow as a player and a person in four years working with her. I value her as a mentor and am excited to watch her lead the University of Minnesota.” 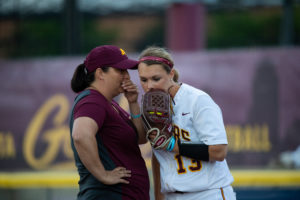