You are here: Home / Sports / Gophers off today; return to fall camp tomorrow 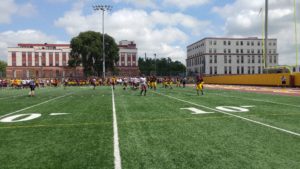 The University of Minnesota football team will have a day off today as fall camp rolls on for the Golden Gophers. Yesterday was the fifth day of fall workouts, but the first in which the team wore full pads and did live hitting on the field. Minnesota junior tight end Brandon Lingen of Wayzata says it was great getting on the field and doing some live hitting with full pads yesterday, but it is also nice to follow that with a day off today.

Lingen says he wants to emerge as a key, clutch pass catcher for the Gophers.

Lingen says he and others have worked hard to make sure they can be clutch players:

The Gophers will return to the practice field tomorrow, have another workout on Friday, and then head coach Tracy Claeys will put his team through two practices on Saturday, including an afternoon session at T-C-F Bank Stadium. The Gophers open the season at home on Thursday, September 1st against Oregon State.