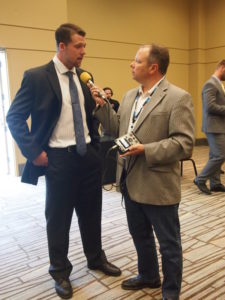 Mitch Leidner has returned to lead the Minnesota huddle with a finally healthy left foot.

He’s bringing 35 games of experience with him.

After enduring his share of struggles with accuracy and injury over the first part of his career, Leidner turned a corner during the second half of his junior season despite playing through the pain and limitation in his left foot that essentially dogged him since the third game of his sophomore year. Now he’s one of the Big Ten’s most seasoned players, getting national acclaim as one of the top NFL draft prospects at his position.

As a native of the Twin Cities area, having played at Lakeville South High School, Leidner has occasionally bristled about the complaints from fans that have come with the job as the quarterback of the state’s only major college. Leading the Gophers to victories over rivals Iowa and Wisconsin and a spot in the conference championship game would be a sweet way to finish as a fifth-year senior.

”I’d probably just retire right after that. Go move up to northern Minnesota and never talk to anybody the rest of my life,” he said, jokingly. ”But I guess on a serious note, it would just feel really good.”

”My big toe was basically floating around in my shoe,” he said Thursday, as the Gophers prepared to begin fall practice.

The injury was aggravated early in the 2015 season, and Leidner had surgery to repair torn ligaments right after the Quick Lane Bowl win over Central Michigan. He sat out of spring practice to recover, but his presence around the program this year has been as large as any player since, probably, quarterback Adam Weber concluded his career in 2010.

”All I’ve got to say about Mitch is that’s a man on a mission,” said tight end Brandon Lingen. ”I’ve never seen a guy more dedicated to a cause in my life. It’s definitely been infectious, too.”

Leidner, a bruising scrambler with 1,129 yards and 23 touchdowns rushing in his career, used a diet change to drop about 20 pounds. The goal is to play this season at around 230 pounds.

Leidner spent another summer at Peyton Manning’s passing camp, picking the brain of the now-retired NFL star. He met again with a sports psychologist offered through the athletic department. He connected with new offensive coordinator Jay Johnson, who grew up in the same suburb as he did. The back-to-normal lower body will undoubtedly be the biggest boon, helping him better avoid pressure in the pocket.

Down the stretch last year, he often wore a walking boot all week, taking it off only for practice.

”I always knew I was going to play in the back of my mind, no matter what condition I was in,” Leidner said. ”At practice, throwing on the run and things like that sometimes was just impossible for me, but I knew that in the game I’d get enough adrenaline pumping that I’d be good to go.”

Particularly at wide receiver and on the offensive line, the Gophers have some areas that will be watched closely this month and next. There’s no concern about the quarterback, though.