You are here: Home / Sports / Gophers outlast Michigan in OT 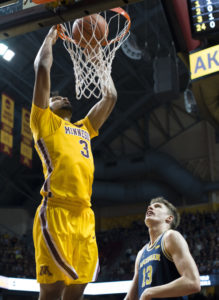 Golden Gopher sophomore Jordan Murphy registered his fourth consecutive double-double to lift Minnesota to an 83-78 overtime victory over Michgan last night at Williams Arena.  Murphy had 16 points and 15 rebounds, while Dupree McBrayer and Eric Curry combined for 27 points off the bench to help the winning effort.  Junior guard Nate Mason netted 13 points and dished out eight assists in the win.  Minnesota has played five overtime games this year, including four at Williams Arena.  They are 3-and-2 in the OT games, including 2-and-2 at The Barn.

Reggie Lynch scored 11 points and grabbed eight rebounds in only 13 minutes of action, as he fought foul problems most of the night.  Tthe Golden Gophers (20-7, 8-6 Big Ten) survived a late rally from Michigan to take another step towards an NCAA tournament bid. The Gophers were 28 of 41 from the line, but made seven of eight attempts in overtime to hold off Michigan.

Derrick Walton Jr. scored 10 of his 16 points in the final five minutes of regulation and D.J. Wilson added 16 points, including the tying 3-pointer with 1.8 seconds to play in regulation, for the Wolverines (17-10, 7-7). Wilson hit the shot from just inside of 30-feet.  Michigan missed nine free throws and Walton missed a late three-point attempt in overtime that would have tied the game again.

Louisville coach Rick Pitino was at the game watching his son Richard coach the Gophers, who beat Michigan for the first time since 2011.  In fact, the Gophers hadn’t beaten the Wolverines in Minneapolis since 2008.  Richard Pitino says his team is playing well now in close games:

After blowing an eight-point lead with just over two minutes to play in regulation, Murphy had a putback dunk with two minutes to go in overtime that pushed the Gophers ahead for good. Minnesota out-rebounded Michigan 44-31 and held a 19-0 advantage in second-chance points.