You are here: Home / Sports / Gophers remain unbeaten with win over CSU 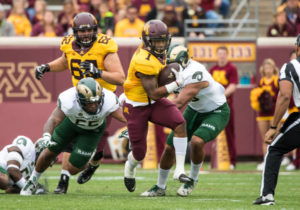 Rodney Smith rushed 17 times for 99 yards and two touchdowns to help Minnesota wear down Colorado State on the way to a 31-24 victory on Saturday.

Shannon Brooks, the team’s leading rusher last year, returned from a broken foot that kept him out of the first two games and netted 85 yards and a score on 13 carries for the Gophers (3-0).

Freshman Collin Hill, making his second start at quarterback for the Rams (2-2), cut Colorado State’s deficit to seven points with a 15-yard toss to Michael Gallup with 6:24 remaining. The Gophers followed with a three-and-out, but Hill’s fourth-down pass at the Minnesota 45 around the 2-minute mark was broken up by Adekunle Ayinde to quash the comeback.

Mitch Leidner’s underthrow toward the sideline was intercepted near midfield by Braylin Scott in the final minute of the first half, but Wyatt Bryan missed a 46-yard field goal as the clock expired to preserve a 17-7 lead for the Gophers.

The Rams were worried enough about the speed of Minnesota’s outside rush that coach Mike Bobo put wide receivers on the scout team at defensive end for a better test in practice this week for his blockers. On the first play from scrimmage, defensive tackle Steven Richardson charged into the backfield for a 10-yard sack. 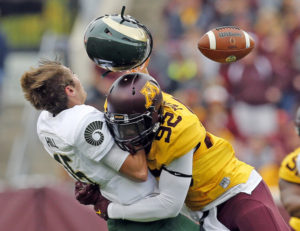 Hill absorbed several hard hits on the afternoon, none more jarring than the sack by Tai’yon Devers that knocked the ball loose and his helmet off to give the Gophers possession at the Colorado State 33-yard line following the recovery by Gaelin Elmore. Devers, a freshman from Pompano Beach, Florida, has forced a fumble on all three of his sacks just 2 1/2 games into his college career.

Minnesota: The Gophers were far from flawless, particularly on defense while giving up 11 gains of 15-plus yards, but they did precisely what they needed to do by completing the nonconference portion of the schedule unscathed.

Colorado State: Hill finished 15 for 30 for 182 yards and one touchdown with an interception and a fumble that led to 14 points for Minnesota, after a much-easier debut against FCS foe Northern Colorado. The experience playing at a Big Ten stadium ought to help him heading into Mountain West Conference play.

Colorado State: The Rams host rival Wyoming on Oct. 1 in their Mountain West opener for the Bronze Boot, the trophy that has gone to CSU for three straight years. This game is the only trip for the Rams outside of Colorado for the first six weeks of the season.

Minnesota: The Gophers go to Happy Valley for their first Big Ten game, at Penn State’s 106,572-seat stadium. Minnesota is 2-4 there all time, having last visited in 2009 and last won there in 2003.