You are here: Home / Sports / Gophers set for NCAA play on Thursday 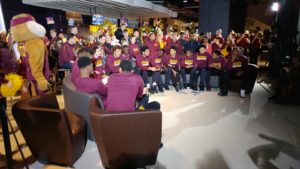 MILWAUKEE — A year ago, Middle Tennessee pulled off one of the biggest upsets in the history of the NCAA Tournament as a No. 15 seed by knocking off No. 2 seed Michigan State.

Now, another year older and riding one of the best streaks in program history, they’re back in the Big Dance as a No. 12 seed, awaiting a date with Big Ten power and No. 5 seed Minnesota on Thursday at the Bradley Center in Milwaukee.

Middle Tennessee has won 20 of its last 21 games and brings a 10-game winning streak to Milwaukee, where it will face a Golden Gophers squad looking to continue a breakout season under coach Richard Pitino.

Pitino orchestrated one of college basketball’s biggest turnarounds this season, going from an 8-23 squad to one that finished 24-9 and won nine of its last 11 games heading into the NCAA Tournament.

“I’m excited for these guys to feel that validation and go to the NCAA tournament,” Pitino said. “This is what you dream of as a coach — to be sitting here.”

Pitino’s future was in question a year ago at this time. His team had managed just two victories in Big Ten play and three players were suspended on March 1 when sex videos were posted on a player’s social media account.

But they opened the season 15-2 and after a rocky start to league play (0-4), the Gophers recovered by rattling off eight straight victories before getting smacked by No. 22 Wisconsin 66-49 in the regular-season finale.

The turnaround set a Big Ten record for season-to-season improvement. 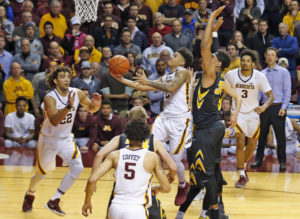 “I don’t know what to say,” junior guard Nate Mason said, taking a deep breath. “Just coming from what we came from my first two years, just to see our name on that screen — it’s amazing. It touched all of us once we saw it. The young guys don’t really get it. The older guys, we struggled. It was a struggle to get here. But we stuck it out.”

Minnesota got quite a gift from the selection committee, which seeded the Gophers fifth and sent them to Milwaukee, a roughly four-hour drive from the Twin Cities. But while the travel will be easy, the matchup will not.

Middle Tennessee (30-4) roared through Conference USA this season and is 5-0 this season when playing on neutral courts. The Blue Raiders return six players from the squad that stunned No. 2 Michigan State a year ago, including junior guard Giddy Potts, who averaged 15.8 points, 5.5 rebounds and 1.9 assists in 34 games this season.

But they’ll have to do more than just rely on memories to get past the Gophers, who hold opponents to just 63.3 points per game this season, the 21st best mark nationally.

“It’s quite an honor to get 30 wins and go back to the NCAA Tournament,” Blue Raiders coach Kermit Davis said. “Our team will enjoy this.

“Our team thinks we’ve got a lot of basketball left and that’s our mindset going forward.”

The winner advances to face either No. 4 Butler or No. 13 Winthrop on Saturday in the second round.