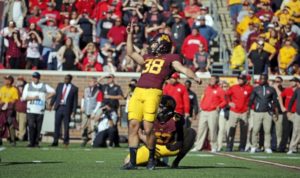 Rodney Smith had a 94-yard kickoff return for a touchdown and ran for 111 yards and a touchdown for the Golden Gophers (5-2, 2-2 Big Ten). Mitch Leidner returned after missing one game with a concussion and was 11-of-18 passing for 156 yards and an interception.

Rutgers cornerback Damon Hayes intercepted Leidner and returned it 55 yards for a touchdown with just over six minutes left in the third quarter, but Scarlet Knights kicker David Bongaura couldn’t tie the game when he missed the PAT. 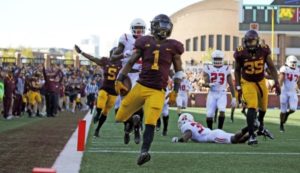 Smith took Bongaura’s ensuing kickoff and raced down the home sideline for the first kickoff return for a touchdown by a Minnesota player since Jalen Myrick in 2014.

Giovanni Rescigno was 22 of 38 for 220 yards passing in making his first start for Rutgers (2-6, 0-5). Rescigno threw three touchdown passes and two interceptions for the Knights, who had scored 14 points in four conference games prior to Saturday.

Justin Goodwin had 19 carries and 97 yards for the Knights.

Bongaura made a 39-yard field goal with 4 minutes left, but Minnesota went 59 yards in 13 plays to set up Carpenter’s game-winner. Smith had 25 yards rushing, including a 3-yard run on third down, spinning away from defenders twice for a first down.

Shannon Brooks had 22 carries for 87 yards as the Gophers ran for 243 yards.

Minnesota linebacker Jack Lynn was ejected in the second half for targeting when he lowered his shoulder and hit receiver Jawuan Harris.

RUTGERS: Despite the two interceptions, Rescigno has given the Knights a spark at quarterback. With the Rescigno using his arm and legs (11 carries for 26 yards), Rutgers had its most impressive offensive performance of the season in Big Ten play.

MINNESOTA: The Gophers defense entered the game with the fifth-ranked defense in Big Ten play. But Minnesota  was shaky against the relatively unknown Rescigno and gave up 372 total yards.

RUTGERS: Finally gets its bye week before hosting Indiana on Nov. 5.

Minnesota: The Gophers go on the road at Illinois on Oct. 29.