MADISON, Wis.  —   Wisconsin guard Bronson Koenig had a disappointing start to his final home game at Wisconsin, spending most of the first half watching from the bench because of foul trouble.

The sharpshooting senior point guard came out firing from 3-point range after halftime, providing a second-half spark in the No. 22 Badgers’ 66-49 victory over Minnesota on Sunday night.

Koenig scored all 17 of his points in the second half and hit five 3s, combining with backup point guard D’Mitrik Trice to help spark a critical win for Wisconsin (23-8, 12-6 Big Ten) and secure the second seed in the conference tournament.

Maybe this will be the game that ignites another March run for Wisconsin after the team had lost five of its previous six games.

”I thought we had more fun this game than we had in a long time,” Koenig said. 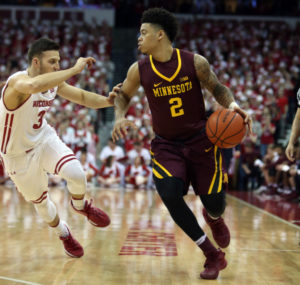 Nate Mason had 17 points for Minnesota (23-8, 11-7). The Gophers had won eight straight, but fell apart on both ends of the floor after halftime.

”We played very, very poorly in the second half, just offensively no flow,” Minnesota coach Richard Pitino said. ”We were not confident in what we were doing.”

Instead, it was the Badgers playing with a swagger at the finish, looking nothing like the team that struggled for much of the last few weeks.

Koenig was 5 of 8 from 3-point range, including baskets on three straight possessions with less than 3 minutes left. When Koenig hits from the outside, the Badgers can be tough to stop with Ethan Happ (nine points, 13 rebounds) and Nigel Hayes providing scoring punch in the frontcourt.

”I just told myself to keep staying aggressive, keep shooting. I guess that’s what I do, is close games,” Koenig said when asked about his late barrage from long range.

”Wow,” Hayes interjected as laughter filled the room. ”It’s about time you did it though, I’m telling you.”

Minnesota: This was an important season for the program regardless of the outcome Sunday. The Gophers rebounded from an eight-win season in 2015-16 to become an NCAA Tournament lock.

Pitino said his team would learn from the loss, ”make sure we address it and get excited about where we sit right now because that’s in a great spot.”

Wisconsin: Trice, a freshman, ran the point for 15 minutes in the first half with starter Koenig on the bench with foul trouble. Trice had a couple shaky moments early, but found Happ inside for key buckets as the Badgers made a more concerted effort to get into the lane. … Among other seniors playing their final home games, Hayes had 12 points and six rebounds; Zak Showalter scored 12 points; and Vitto Brown had five points and six boards.

Trice had a four-point play after getting fouled on a 3-pointer with 12:24 left, before hitting a layup about 20 seconds later. His play helped ignite an 18-2 run over a six-minute stretch that gave Wisconsin a 13-point lead with 11:32 remaining. Wisconsin coach Greg Gard said he is impressed with how Trice has matured over the course of the season, to the point at which he could trust him in the first half with Koenig in foul trouble.

Wisconsin played its best game in weeks, looking again like a team that could make a deep run in the NCAAs.

The offense seemed to provide a spark on the other end of the floor, where the Badgers regularly contested shots in the lane and hustled for loose balls.

Minnesota got as close as 51-45 with 6:20 left on Amir Coffey’s 3-pointer. But there were too many other missed opportunities for the Gophers, who shot just 7 of 30 in the second half (23 percent) and were outrebounded 24-17 in the period.

”I think we were pretty good most of the game, but in the second half, we were terrific at times,” Gard said. ”The togetherness, the grittiness … that was us.”

Minnesota led 29-27 at halftime, shooting 42 percent from the field and getting 11 points from Mason in the first half.

Minnesota: Heads to the Big Ten Tournament in Washington with the fourth seed.