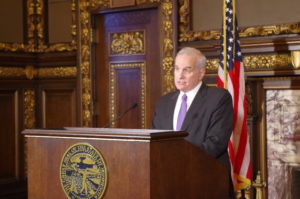 Governor Mark Dayton today blasted President Trump for reversing his predecessor’s guidance to school districts on transgender bathrooms. Dayton says it’s not a states’ rights issue — it’s about human rights.  He says, “As a person of Christian faith, I am mystified that others who profess to be people of faith could demonize schoolchildren who simply want to go to the bathroom.”  Dayton says although there’s no explicit provision in Minnesota law requiring schools provide bathrooms for transgender students, state law *does* prohibit bullying of transgender students or any others. Dayton is strongly urging school board members to adhere to directives established by the Obama administration.

Senate Majority Leader Paul Gazelka calls the president’s decision a “reasonable direction.”  The Republican from Nisswa says, “I think that’s the best approach, that we watch and let our local schools figure this out. Every situation’s different, and I think that’s a better way to do it.”